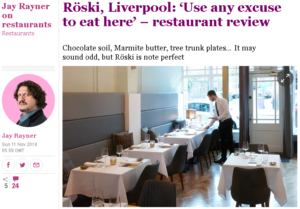 For The Observer, Jay Rayner  recommends that you “find something worth celebrating” in order to eat at Liverpool’s “note perfect” Roski, from former (joint) MasterChef: The Professionals winner, Anton Piotrowski, who Jay remembers judging in 2012. He tried cooking in rural Devon and Plymouth before settling here – all Jay can say is “Lucky Liverpool”.

“Care has been taken with the room from … the loo downstairs” to “the covetable Japanese ceramics” and the service is “effortlessly cool and charming”, but the real point of this place is the food: “serious, bourgeois cooking”. The menu offers up complex, intricately presented small plates, some “no more than two mouthfuls” but all memorably delicious: “there is a place for complicated, if you know what you’re doing”.

Jay ate cod marinated in green tea and an “impeccable langoustine” that he described as “pure gastronomic smut”, followed by a meatless red cabbage bolognese “with all the flavours of a classic spag bol”. Meat dishes and a fish course that tastes like a “lost night on the Marseilles docks” (plus that MasterChef-winning carrot cake with chocolate soil) convince him that this is “the Spinal Tap of restaurants with every flavour turned up to a welcome 11″. 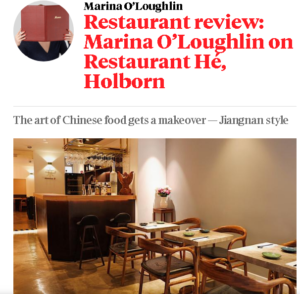 Marina O’Loughlin for The Sunday Times had to call in help from the “supremely knowledgeable Fuchsia Dunlop” to verify the authenticity of her latest discovery, a Chinese restaurant “in a little Holborn side street” serving Jiangnan cuisine, from the region surrounding Shanghai.

On her first visit she had “the most extraordinary dinner”, food that’s “an incredible collision of delicacy and savour”. This, apparently is typical of the region: “bold flavours married to delicacy and technique”. Dessert was a “gloopy challenge”, though.

After three visits, Marina just didn’t care whether or not it was authentic: it’s a “chic little spot” (perfect for the local affluent Asian students) that had a new menu for each of her visits. Worth another visit – and a review in The Sunday Times? “Absolutely. It’s never less than absolutely fascinating.”

Grace Dent in The Guardian had “big, daft, delicious fun“ at New York import Red Farm, which is “a different dumpling entirely” from A Wong and Jen Cafe, but never tries to be anything else. The decor has a “Willy Wonka’s farmhouse” feel, “all decked out in red gingham”, with “incessantly upbeat staff “.

She sampled all of the already-famous dishes: the Pac-Man dumplings (“Go on, take a photo. Everyone else does.”), the cheeseburger spring rolls, “a wild mix of high finesse and 3am stoner experimentation” and the “wickedly delicious” signature pastrami egg rolls, which have a “Sichuan skeleton and a wanton, Lower East Side underbelly”. It’s expensive, but “a place to remember if you simply want to please people”. (25/30) 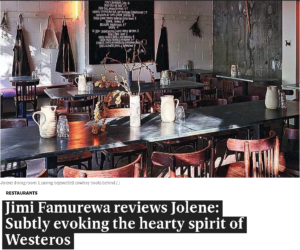 Jimi Famurewa for The Evening Standard found himself in Game of Thrones territory at North London’s latest hang-out, Jolene – not just the Nordic decor, with its “flame-flickered darkness”, but also the “ancient grain-focused food… invokes the intensely hearty, medieval grub that would fuel dynastic wars in Westeros”.

From the “terrific” pain de Naroques to the “powerfully cheesy, risotto-ed spelt” and Swedish gratin potatoes enriched with anchovies that was “a big, Scandi bear hug of a thing”, the food wears “practical, cold-weather thermals rather than [the] bejewelled cowboy boots” that you’d expect from somewhere named after a Dolly Parton song.

With service that’s “meerkat-alert and amiable” and an atmosphere of “effortless cool” (and a hint of “noble evangelism about sustainable, chemical-free crops”), he coudl think of no better place to “eat with the seasons”… after all, “winter is coming”. (7/10) 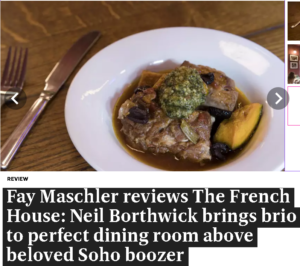 Fay Maschler‘s review for The Evening Standard this week took her to The French House,  the restaurant “above a boozer” where Neil Borthwick of Merchant’s House was recently installed, the latest in a long line of famous chefs here.

Neil’s “passion for France, French bourgeois cooking” is obvious in the realisation of “notable dishes” like rabbit rillettes with sourdough toast and “a slow-cooked stew that would have seduced Elizabeth David”. Fay’s lunch guest at her second visit notes that “the chef is cooking what he wants to”.

The landlady, in place since 1989, “runs a tight but ticklesome ship” that successfully combines the bar, full of quirky regulars, and the “perfect small dining room” restaurant upstairs. 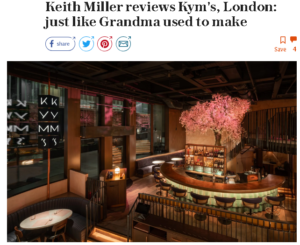 Keith Miller in The Telegraph reviewed Andrew Wong’s City newcomer Kym’s, named after the restaurant that his parents used to own in Pimlico (now his restaurant, the acclaimed A Wong), which was itself named after his grandmother; the food was “just like Grandma used to make”.

Tom Parker Bowles for The Mail on Sunday also reviewed Kym’s. He described the room as “discreetly, expensively handsome… like the Hong Kong penthouse of an achingly metrosexual James Bond baddie” with the “intense, frantic buzz of an old-school Hong Kong dim sum parlour”.

He started with “silkenly seductive tofu” (****), chased it with a Xian lamb bao bun – a “two-bite triumph” and the “deepfried brick” of crispy duck and a lemon grass salad that was “a joyous jolt to the taste buds”. The roasted meats were “seriously superior flesh” – “Wong approaches these cuts with the precision of a nuclear scientist, the zeal of a carnivorous evangelist.”  Despite having clearly delighted in “the sheer joy of a master at the top of his game”, TPB still only awarded Kym’s four stars. (****) 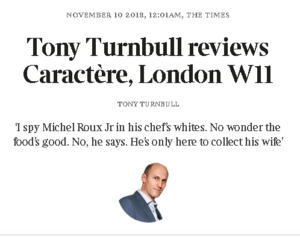 Tony Turnbull, food editor of The Times, stepped into Giles Coren’s loafers for this week’s Saturday Times magazine review. He managed the Coren-esque off-topic pre-amble adequately, before launching into a somewhat muted rave about the “proper family concern” that is Caractère.

Diego Ferrari and Emily Roux have “put on as good a show as possible with a keen eye on the budget”, decor-wise. The food, from the starters onwards shows “imaginative counterpoints” and shows off Ferrari’s “dexterity”, in spite of the “somewhat contrived” menu styling. Veal sweetbreads were a “masterclass in glandular cooking” and cod with a crispy potato nest (“kind of Italian fish and chips “) was “sensational”. He describes the celeriac cacio e pepe as a “Notting Hill 2018 mash-up” but enjoyed it all the same.

Ideally, the couple will resist temptation and keep Caractère as “a casual neighbourhood restaurant” that locals could visit regularly. (8/10)

Tim Hayward for The FT visited the Herefordshire restaurant that “helped start a revolution” — and “delighted in every course” at The Stagg Inn, Titley: “It’s a hell of a lot more gastro than pub”.