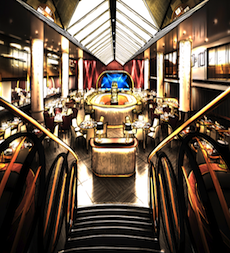 Once a byword for glamour, but in recent years more likely to provoke words like ‘dinosaur’, ‘tired’ and ‘dated’, Quaglino’s, in St James’s, has finally undergone a major refurb.

We’ve reported the place as ‘fading’ for over a decade, to the extent that recent guides have often called for D&D London to do something about it. Perhaps someone finally listened! The restaurant will reopen after a £3m refit with a new look, new menu and new head chef,Mickael Weiss, on 17 October.

Mr Weiss is currently head chef of another D&D London property, Coq d’Argent – always, it must be said, a property more renowned for its spectacular heart-of-the-City location than for its cuisine (dismissed by some reporters in the 2014 survey as “by numbers”).

When Quaglino’s was originally launched by Giovanni Quaglino in 1929 it was the haunt of celebrities and high society. Even HM the Queen visited in 1956, becoming the first British monarch in living memory to dine in a London restaurant.

Ultimately, it passed through many hands. Trusthouse Forte bought the place in 1980 but later sold the site for redevelopment. Then, in 1993, it was relaunched by (Sir) Terence Conran. Briefly, this was the Chiltern Firehouse of its day, with the almost bunny girl-style cigarette girls – what a far-off era the early-’90s already seem! – quickly becoming staples of urban legend.

D&D London hope the refurb will be in keeping with the 240-cover dining room’s “iconic heritage and glamour, whilst creating a new venue for future generations of Londoners to enjoy”.