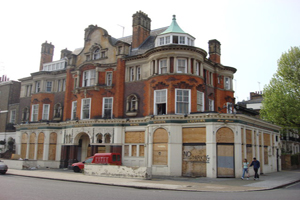 The once magnificent Crocker’s Folly in St John’s Wood, which was rescued from an uncertain fate by the Maroush Group, will reopen after a complete makeover on 25 October. Diners who want to get a sneak peek at the Victorian gin palace’s restoration can book now for a special soft launch offer of 50 per cent off their food, 22-24 October.

Built as the palatial Crown Hotel by entrepreneur Frank Crocker in 1898, the pub was playfully renamed back in 1987 to reflect local legends that Crocker went bust building the place (wrongly believing it was on a site adjacent to that designated for the railway station ultimately built at Marylebone).

The site thrived as a pub for over a century, but finally closed in 2004 and fell into disrepair. Now the Maroush Group has vowed to restore it to its former glory, relaunching it as a bar and restaurant.

The kitchen will be headed up by Arek Bober, latterly of Pollen Street Social who has created a menu including crab gnocchi, courgettes and chilli; sea bass with cauliflower couscous, cauliflower purée and truffle and miso marinated lamb shoulder, kale and potato mousseline. There will also be a selection of contemporary Lebanese dishes. Oh, and expect to find a range of steaks, cooked on the appliance du jour, the Josper grill.

Crocker’s Folly is now accepting reservations via reservations@crockersfolly.com or telephone 020 7289 9898.

The copyright on this image is owned by Oxyman and is licensed for reuse under the Creative Commons Attribution-ShareAlike 2.0 license.