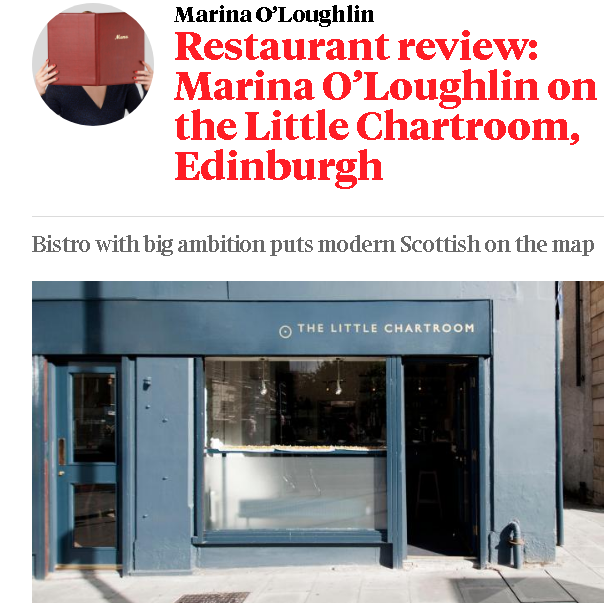 Marina O’Loughlin for The Sunday Times warily reviewed “small neighbourhood bistro” The Little Chartroom – it’s just the sort of place she’d hate to slate. Luckily, with all credit to chef Roberta Hall and her husband, Shaun McCarron, she didn’t have to.

“Exciting soup” to start (“two words I didn’t think I’d ever serve up together”) – a game broth that “shimmers with layer after layer of flavour… like an aristocratic Scotch broth”. A duck bun dunked in “delivers a blast of undiluted rapture”.

“Augmented simplicity” continues with each course, including a main of “iterations of venison”: “it feels as close to Scottish terroir as you can get without rolling around in the gorse, tweed-kilted, bellowing “Hoots!” and painting yourself blue.” Desserts are “a cross between sophistication and hand-knittedness”.

“Odd distractions” and unconvincingly vegetarian options aside, Marina delighted in the place, praising the team for “doing everything they can to be the holy-grail cross between critical success and crowd-pleaser”. She christened the cuisine “New Scottish”. 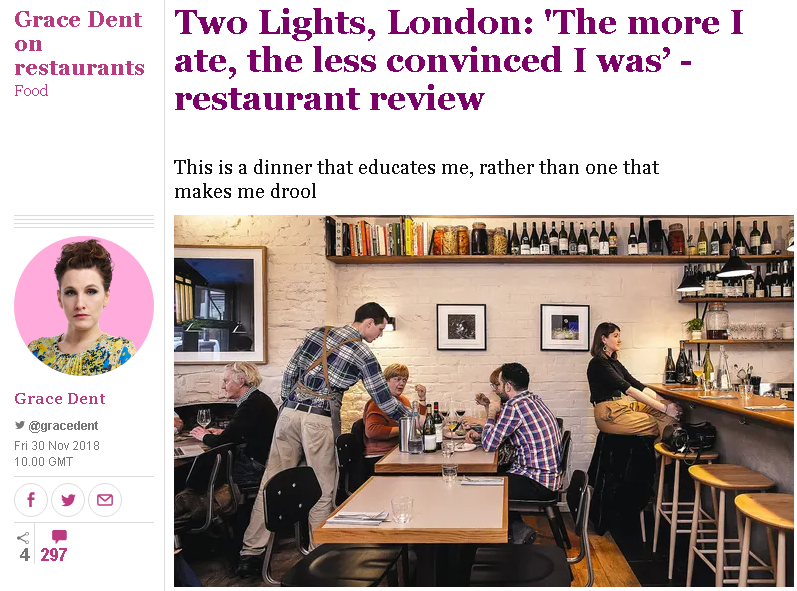 Grace Dent in The Guardian is the first of the national critics to review the “important London opening” that is Two Lights, from chef Chase Lovecky, formerly at The Clove Club. Its signature dish (“all restaurants in 2018 must have a dish to provoke Instagram users.”) is the “the fishtail hanging out of a sandwich” – or sardine katsu sandwich as it’s officially known.

The Shoreditch setting is “a rather noisy room with white brick walls and delightful service”; the menu is “modern American sharing plates, hewn of intriguing, deeply pre-trend foodstuffs”. Expect “askew slants on seafood, Japanese influences, relaxed shack vibes and high-end American swagger” – what Grace also refers to as the “WTF-ness of Lovecky’s vision”.

Educational rather than purely enjoyable, with many “dishes that other chefs will riff on, rip off or simply bitch about who invented them first” (although “carbs are thin on the ground”), Grace will “enjoy watching Chase Lovecky’s work filter through the country’s kitchens”. (23/30) 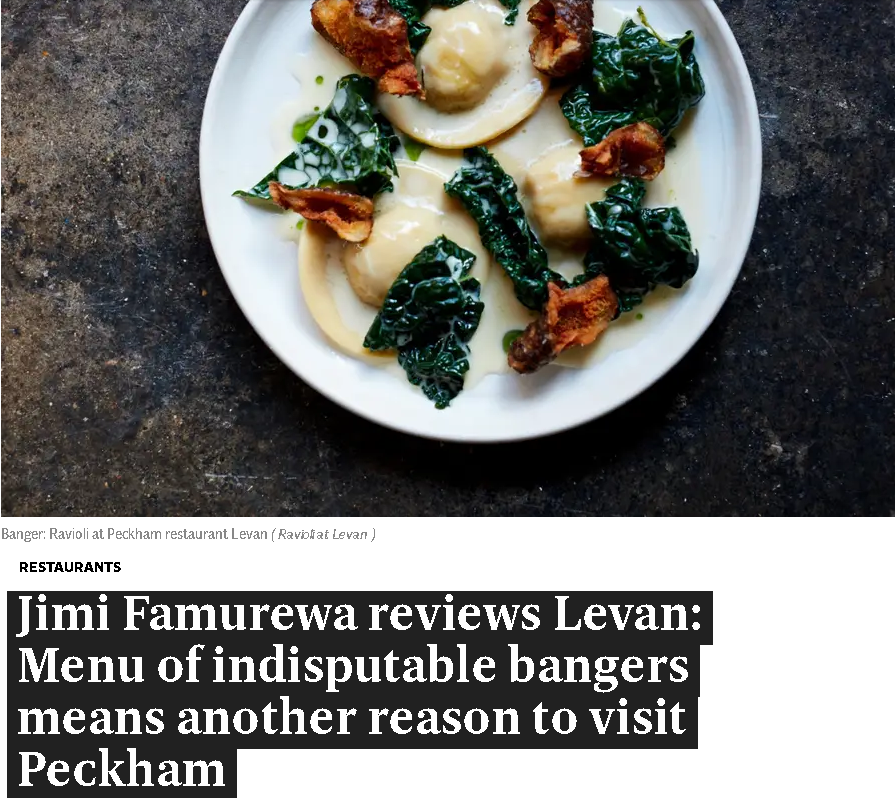 “Peckham has long been on every Londoner’s cultural radar, it has just been given another hell of a boost.” Jimi Famurewa for The Evening Standard visited Levan, the newest SE15 arrival and “a new all-day bistro from the team behind Brixton’s justly adored Salon”.

“It’s a gently grown-up operation where the prices are reasonable, the Francophile food balances ambition and comfort, and the loos aren’t the kind likely to give a visiting older relative PTSD.”

Another must-do on any foodies’ cultural map of Peckham, Levan serves up a menu of sharing dishes inspired by “the relaxed inventiveness of the French ‘bistronomy’ movement”, alongisde a “bumper list” of wines, in a room with “walls painted a deep, sexy blue”. The must-do dish “possibly already rivalling that pink stairwell for Insta fame” is Comté fries, although Jimi also noted that the roasted celeraic ravioli was “an indisputable banger”. (9/10) 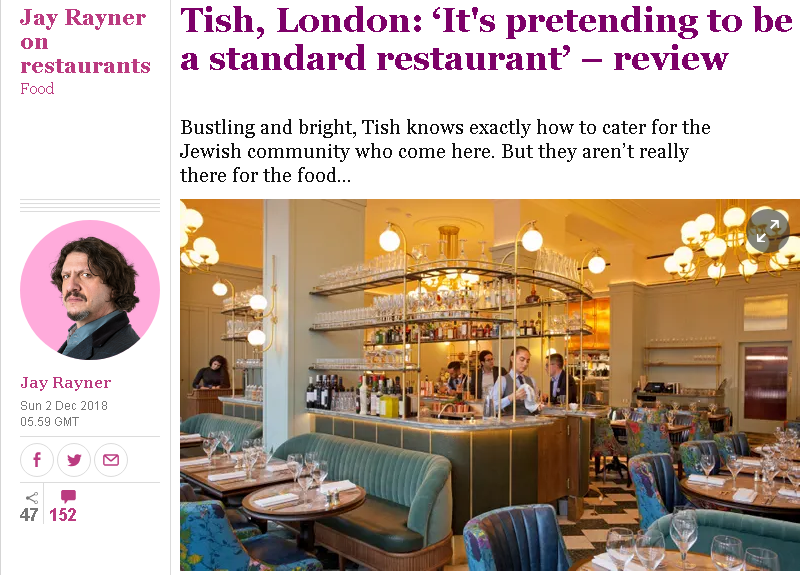 Jay Rayner  for The Observer indulges in some “pure observational journalism” when he visits Tish, a new Belsize Park kosher restaurant. Unless you keep kosher, there’s not much you need to know: “it’s a bustling, noisy restaurant, frequented by a particular community. It’s already full and will stay that way.”

Tish offers up a “very good salt beef sandwich”, chicken soup that’s “a beautiful thing… crystal clear but full of depth” and a “perfect” lokshen [noodle] pudding that’s “dense and claggy and possessed of its own gravitational field”, with a ” peculiar” all-kosher wine list. 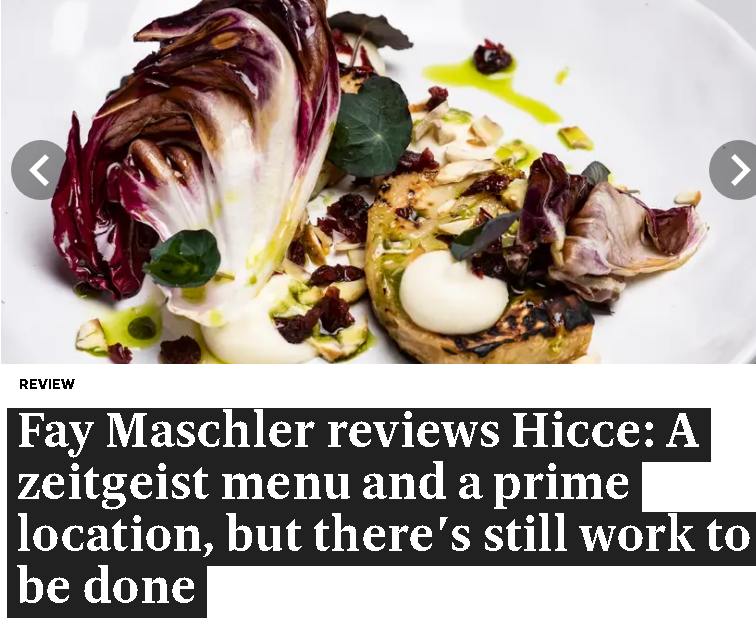 Fay Maschler for The Evening Standard played ‘spot the trend’ at Hicce in the hip new Coal Drops Yard development, from “celeriac as a hero ingredient” to hashtags on the menu.

“The joint is jumping” at dinner but quieter on a lunchtime visit; each dish Fay tried was not quite right, missing flavour or with “too much butter or too little miso”, and she described the menu as “sketchy rather than substantial”. Her overall impression of the place was that Hicce “opened to order… rather than when they felt absolutely ready”. (***) 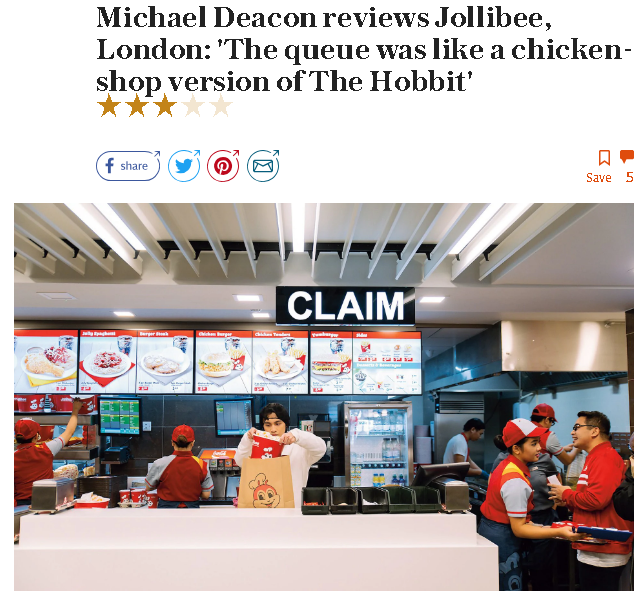 We all expected queues on the first day, but “a full 10 days after it opened, the pavements outside Jollibee were still swarming at all hours “, according to Michael Deacon of The Telegraph, who visited the Filipino chicken shop chain’s first UK outpost several times before he got in. “In many ways, mad, but it was fun, too.”

The queue was almost entirely made up of supportive, hungry and excited ex-pats (Jollibee is “even bigger over there than McDonald’s”). After two and a half hours of waiting, Michael was sitting with his food in a room of “unreal light and deafening colours” with “mercilessly upbeat Filipino pop music” and a “general air of manic, borderline hysterical euphoria”.

Almost more “cartoonish” than the decor was the food (much of it “strangely sweet”), with names like Yumburger and Chicken Joy – all of it accompanied by “remorselessly addictive chips”.  (***) 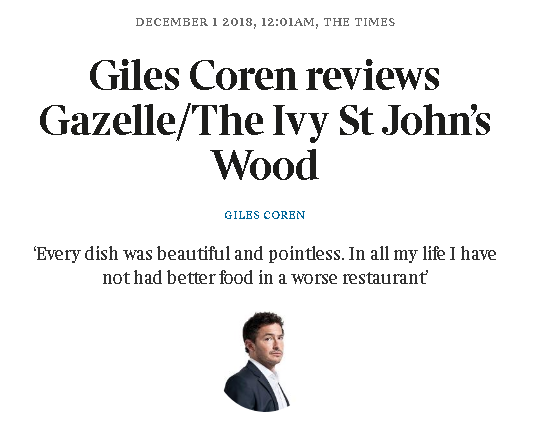 Giles Coren continues with his multiple reviews for The Times this week. To start with: much like Jay Rayner’s review, he visits a restaurant much-loved by the Jewish population of north London – The Ivy’s St John’s Wood outpost, part of the “distressingly rapid roll-out” of the brand. It was jam-packed and decorated just like the original, but presumably people weren’t there for the food: crab linguine was “dull and unsexy”, the truffled orzo was “bland, bland, bland” and the monkfish and tiger prawn curry was “a soggy mess”. (16/30)

In search of better food, Giles headed to Gazelle, which was almost the opposite of The Ivy NW8: “hilariously ill-conceived with absolutely nothing right about it at all” – apart from the “incredibly tasty food”. “Each wall was a different hideous colour” with “big, black and white pictures of body parts”  that were “at once irrelevant and terrifying”. Even the stark menu (especially the ” mind-blowingly expensive “prices and the “teeny-tiny” cocktails) was odd.

But “every dish was beautiful and pointless in equal measure… we loved them all to death”. “Exquisite” plating, “breathtaking” colours and “immense” flavours: “there is a wit, even humour to the dishes that reminded me of El Bulli… in all my life, I have not had better food in a worse restaurant”. (8/10)

Tom Parker Bowles for The Mail on Sunday has collaborated with jolly wine expert Olly Smith to produce a list of Britain’s 100 cosiest pubs.

Nick Lander for The FT kicks off the annual festive summaries with a round-up of his top meals of 2018, “from Guy Savoy in Paris to Angela’s in Margate”.