Yes, we know there’s a World Cup on. Nothing else matters, you say? Ahem. One word: tennis. Yes, rackets at the ready, we can’t ignore our beloved Andy Murray.

What’s more, while we appreciate all the delicious snacks and glorious pints which match so beautifully with watching England try their feet at football, we can’t skip champagne and strawberries over the summer. Not least because it’s already a scorcher. The cricket. Well. We can leave that for now… (it’s not going well).

Outside Wimbledon itself, where might we sit down to watch Murray, Federer, Sharapova and the Williams sisters do their thing? What about the Sanderson Hotel in Fitzrovia, where a dessert looks like a tennis ball and costs £11? The sphere is made from yuzu and bergamot, alongside crispy meringue and fresh berries.

Here are some other options for Wimbledon fortnight, July 2-15… We’ve collated a super list for you here with some of the finest spots in London. 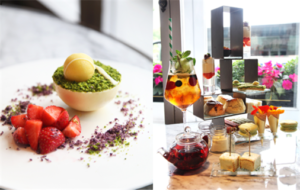 At Lanes of London, not yet rated by Harden’s, there are two dessert specials on the all day menu, as well as a special Wimbledon tennis-themed afternoon tea that champions British ingredients.

‘The Turf’ is an indulgent white chocolate dome (filled with a creamy chocolate centre) and topped with pistachio, basil and strawberries to form a tennis court; while ‘Strawberries & Cream’ is a cream trifle with champagne jelly.

On the afternoon tea you’ll find Earl Grey and raisin scones, scorched elderflower and gin and lime marshmallows, and the treats noted about. It’s £29.50 and comes with tea and a glass of Pimm’s. 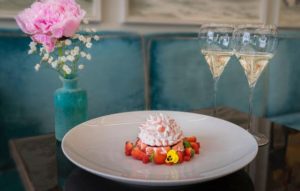 At Manetta’s Bar at Flemings Mayfair Hotel, you’ll find a Wimbledon-styled fine dining twist on an Eton Mess. Manetta’s is a popular choice for readers – and Harden’s readers are no strangers to Flemings either.

Champagne and strawberries come as part of the deal two – two glasses of Champagne Devaux, and an Eton Mess to share is £22.50.

Sounds… ace? It will be. Though do note: the champagne serves are 70ml, so you may well need to order more. 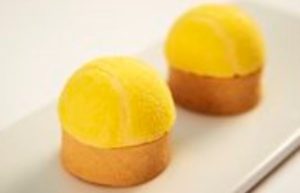 Conrad London St James will be serving a Wimbledon-inspired cocktail in the Boar Bar. ‘Top Spin’ is a fruity blend of vodka, peach, Pimm’s, lime, orange and ginger ale – something to sip while watching the action of the bar’s big screens.

In Emmeline’s Lounge, the five-star hotel’s traditional afternoon tea will include a special Wimbledon fancy in the shape of a tennis ball. A sweet pastry case comes with a coconut filling, and is topped with a layer of mango gel, a Malibu and coconut mousse, and finished with a white chocolate coating.

The Wimbledon special will be available throughout the championships, priced at £35 pp for the afternoon tea, or £42 pp with a glass of Pimm’s.

Head chef of Roux at Parliament Square, Steve Groves, has added a strawberry dessert to the menu for Wimbledon 2018.

The pudding combines fresh English strawberries with a white chocolate delice, pistachio cake and vibrant green basil sorbet. The dessert is available as part of the regular a la carte as well as the seven-course tasting menu (from £59 per person).

And hey, this may well be a winner: Roux has a five-star rating in Harden’s. Readers say:

“Perfection!” – “I enjoyed every single mouthful!” – “wonderful food and service in the Roux tradition” 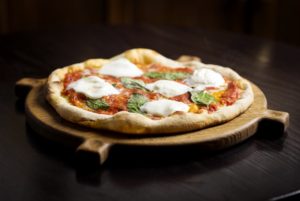 There’ll be live screenings at Jason Atherton’s The Drunken Oyster, which sits above Hai Cenato (three stars for food) in Victoria.

A selection of cocktails inspired by Italian classics including the ‘Amalfi 75’, featuring Limoncello, Italicus bergamot liqueur, and citrus topped up with prosecco. 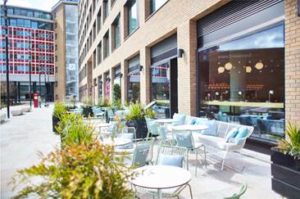 A new Bluebird Café has opened at the Television Centre White City, one of London’s hottest new developments. It’s a long way from the famed Chelsea outpost, but a cool spot for West Londoners.

The all year-round terrace is set to rival that of the King’s Road original, opening out onto a piazza overlooked by the Television Centre’s famous circular core – and more importantly, its summer outdoor screen. A grand slam for Wimbledon viewing.

Chef Simon Gregory has designed a modern European menu at the new Bluebird, and there are sandwiches and cakes too for causal diners. 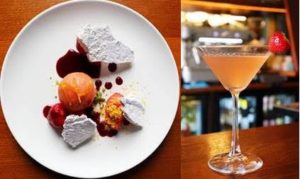 The Welsh chef, in his new restaurant at Somerset House, is honouring the tennis championships admirably.

The matching cocktail includes fresh strawberries and basil syrup – and there’s more than enough gin doing the rounds to get every giddy for – we hope – Murray’s tournament triumph. How does Bryn’s new restaurant fare with readers? We’re yet to find out. Review here. 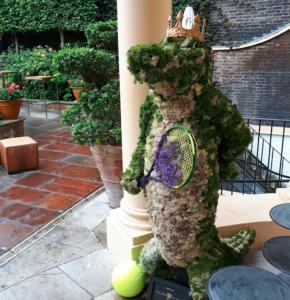 Chef Sophie Michell has taken the helm at Home House and is doing what she does best: simple, happy food with bold flavours.

Her new restaurant is too new to yet feature on Harden’s, but get down there. And she has pedigree, featuring on the site before alongside such names as Tom Aikens and Calum Franklin.

The private members’ club restaurant has launched a Sunday men’s final package – and non-members are welcome. Included is a luxury stay in a double room and a set champagne lunch for two in The Garden restaurant, with live viewing of the final match. 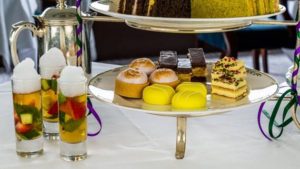 Wimbledon Afternoon Tea at The Petersham

Chef Jean-Didier Gouges at The Petersham in Richmond has served up an ace of an afternoon tea for the Championships, available from Monday 2 July – Sunday 15 July, from £27.50pp (plus £12.75 for Petersham Champagne).

Alongside a classic selection of finger sandwiches, scones and patisserie are a Pimm’s jelly and cucumber foam, mini mango ‘tennis ball’ cheesecakes and white chocolate and strawberry tartlets.