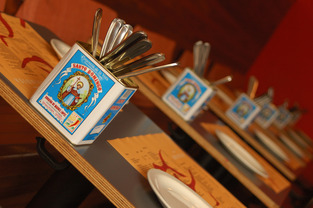 Spanish food importer and restaurant group Brindisa Tapas Kitchens will add a fifth London outpost to its growing empire with the launch of Morada Brindisa Asador in Soho. Opening in March in Rupert Street, practically next door to the acclaimed Israeli newcomer The Palomar, the concept introduces a whole new Spanish dining tradition with which Londoners can fall in love: Asador – the roasting of suckling pig and lamb in wood fired ovens.

Although officially opening on 9 March, early birds can get 50% off their bill between 4-8 March for lunch or dinner. Email reservations@moradabrindisa.com to book a place.

With the addition of this well known chain of tapas joints, it seems that dining in the streets around the restaurant dessert that is Shaftesbury Avenue continues to improve. Brindisa already has outposts in London Bridge, South Kensington, Shoreditch and Soho’s Broadwick Street.

On top of this the increasingly busy Brindisa group will open its first restaurant in Barcelona in early April 2015, just a stone’s throw from the city’s famous Boqueria market. Like its Borough Market counterpart, Brindisa Barcelona will use its market adjacent location to emphasise the importance of ingredients and small producers.