Bringing a taste of Spain to this year’s Easter celebrations, Brindisa have created a line-up of seasonal dishes that are traditionally enjoyed in Spain during the festivities. Exclusively at Brindisa Shoreditch, founder Monika Linton and Group Head Chef Leo Riviera have created a sharing version of their Huevos Rotos (broken eggs with fried potatoes) with a giant ostrich egg taking centre stage. 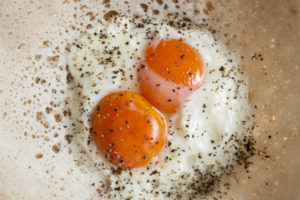 To celebrate Easter, the Sethi siblings’ ultra tasty Sri Lankan street food venues Hoppers are running a Double Egg Roulette competition. Drop by either the Soho or Marylebone restaurant for lunch or dinner, between and order an Egg Hopper for a chance to win a limited edition Hoppers comic sketch T shirt. Those lucky enough to find a double yolk win a prize. 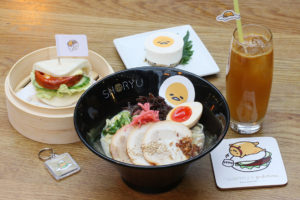 This Easter London welcomes one of Japan’s most popular characters, Gudetama the lazy egg, with an eggs-clusive egg-themed pop-up menu at Shoryu Go on Air Street. The special menu includes three courses plus drink for £21. Start with Shoryu buns (char siu barbecue pork belly or grilled halloumi) before moving on to Shoryu Ganso Tonkotsu with added fried shallot and Gudetama egg or White Natural – their unique tonyu soy milk, with miso, konbu & shiitake broth, garnished with a Gudetama egg on the side. For dessert there’s Matcha Cheesecake or Yuzu Cheesecake, both served with Gudetama decoration. 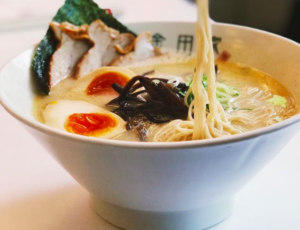 If you love an egg in your ramen may we also humbly suggest you get yourself to one of Kanada-Ya’s noodle bars for some Tonkotsu with a Chashu-cured Burford Brown? There are now three outlets to choose from as the chain just opened a site in Islington. The original is a tiny Holborn/Covent Garden-fringe spot where you’ll face a lengthy queue, and there’s also a larger restaurant just off Piccadilly Circus. Whichever one you visit, be sure to order an eggs-tra egg on the side. We’ve reached egg pun overkill now, we do apologise. 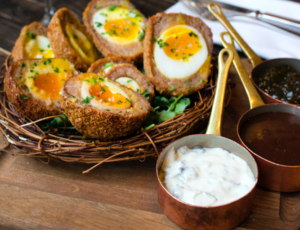 Switch chocolate eggs for Scotch eggs at The Jugged Hare this Easter. The quirky City-fringe gastropub is offering a unique twist on the traditional Scotch Egg, with its seasonal ‘Egg Flight’ dish. A generous basket full of goose, hen, pheasant and quail eggs served with a selection of mint yoghurt, mint jelly and apple caramel sauce, priced at £15 and available over the Easter weekend. 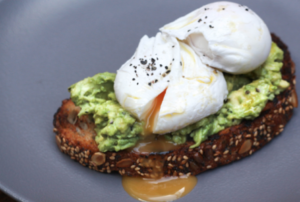 This Easter the Galvin Bros’ Spitalfields pub will be offering an all-day bottomless brunch special – two courses with the option to add on unlimited Prosecco, Bloody Mary or Pilsner Urquell for an extra £15. We like the look of those poached eggs with crushed avocado, urfa chilli flakes and rye bread. Plus children under 12 eat for free at Galvin HOP the whole weekend. 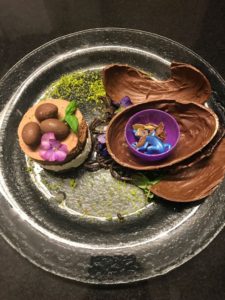 As Easter is a great time for families, Atul Kochar’s Mayfair Indian has created something eggs-tra special – a deconstructed bespoke chocolate Easter egg for dessert which includes a toy in a chocolate shell. Benares describes it as a ‘Michelin-inspired equivalent to the Kinder Surprise!’

Atul will also be serving his famous ‘Lamb Raan’, which is designed to be shared with the table. The slow-cooked leg of Cornish lamb is marinated in their signature blend of Lucknowi spices, gently cooked for 12 hours and then finished in the tandoor oven. Ideal for 2 to 3 guests, half a leg is £60 and for 4 to 6 guests, a whole leg can be ordered for £120. This will be served alongside a fresh spring salad, dal makni and warm naan bread. 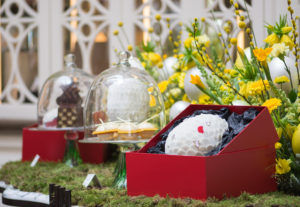 Available from 19 March in the Moon Lounge

Inspired by the Baccarat Full Moon Chandelier designed by Chafik Gasmi, these designer Easter eggs at the Corinthia hotel are £115 a pop. Before you balk at the price let us tell you that each egg takes three hours to make, handcrafted by the hotel’s exec pastry chef Loic Carbonnet. Made from 66% Valrhona Grand Cru dark chocolate, it is covered in 33% Valrhona Grand Cru white chocolate discs as well as a single red disc. Each egg is presented in a specially commissioned red Baccarat box. 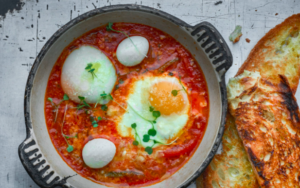 Since they started serving brunch on 15 March, Sartoria in Mayfair has been doing some frankly eggs-traordinary things with eggs. We suggest you try any of chef Francesco Mazzei’s new menu, however those partial to a kick of chilli in the mornings should try the Eggs Purgatoria: Baked eggs, spicy tomato, ‘nduja sauce and crostini. The Patata uova e caviale (double baked potato with soft boiled egg and Keta caviar) is also worth a try. 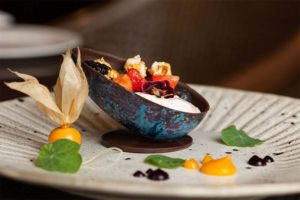 As part of their Maharaja feasting menu, this stunningly appointed dining room in the Lalit by Tower Bridge is offering a signature Easter-inspired dessert. The Surprise Easter shell includes cardamom shirkand with tamarind macerated berries and rasamalai crumble served in a chocolate egg shell. The £60 pp menu also includes a guinea fowl seek kebab, lamb rack with smoked aubergine and potato chokha and much more.