Demonstrating just how far cooking in this country has come in the last 20 years – the top 10 modern British restaurants in London, according to our 2015 survey.

“Superb meals seem natural”, at Brett Graham’s “flawless” Notting Hill stand-out: yet again London’s No. 1 restaurant; there’s “no pomp” – staff are “so naturally courteous and efficient” – and his “inspired” cuisine is “as close to perfect as you can get”.

“A gem in the heart of Chelsea”; this “brilliant” yearling is a formidable all-rounder, combining “sensational” and “clever” cooking with a “stunning and intimate” interior, plus service that “perfectly balances formality with being welcoming”. 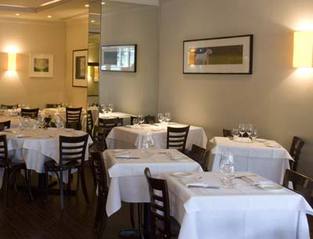 Bruce Poole’s “quintessential neighbourhood restaurant”, by Wandsworth Common, celebrates 10 years as the survey’s No. 1 favourite; the secret? – “sublime” and “inspired” cuisine, “brilliant” wine, “welcoming but unobtrusive” staff… and a cheeseboard “to die for”.

“Hats off” to Simon Rogan, for the relaunch of this landmark Mayfair Art Deco chamber, where “gloriously attentive” service only adds to the enjoyment of the “phenomenal” meals – up to 17 courses that are “so different” (and, for those who so opt, come with some “exceptionally well-matched wines”). “Excels in every way”; this “enterprising” and “pleasant” favourite, near Balham station, is a “wonderful” and “sensibly priced” operation – “more relaxed than Chez Bruce, but snapping at its heels in terms of quality”.

“More interesting, more charming and less pretentious than many a fancy West End eatery” – this “daring” Clapham yearling may be a bit “cramped”, but its “experimental” and “artistic” tapas-style cuisine really “sparkles”. 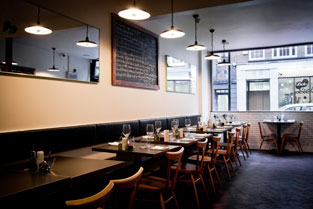 “Informal brilliance” has won a huge following for this “well-priced” (but “cramped”) Soho two-year-old, which offers “outstanding” dishes from an ever-changing menu, and “great, well priced wines” to go with them; only problem – no dinner reservations.

This “under-the-arches foodie destination” – in the ‘new’ Borough Market – offers a “most interesting selection of bio and small producer wines”, complemented by “outstanding” small-plate dishes; “get there early as it’s full by 8 pm”.

“Worth the effort!”; Melanie Arnold & Margot Henderson’s “quirky” and “incredibly hard-to-find” daytime venture, hidden away behind the wall of a Victorian school in Shoreditch, attracts a dedicated following with a “daily-changing” menu which makes much use of “super-fresh produce”.

NEWS
Greek restaurant INO, from founders of OPSO, to launch in West End