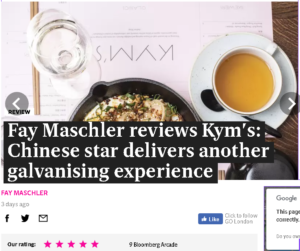 Five stars for Andrew Wong’s new City restaurant in The Evening Standard from Fay Maschler. She admits to feeling “proprietorial” about the chef, having been the first to review his reincarnation of his parents Pimlico restaurant in 2012, delighting in the ” skill, wit, inventiveness, subversion and astonishment” of the dim sum (and, yes, she squeezes in mentions of Patio, Otto’s and Riva that regular readers will be only too familiar with).

Wong’s Bloomberg Arcade venture is, however, “a very different kettle of fish”; here, “roasted meats are the heart of the matter”. But vegetables feature well too: wild mushroom steamed buns have a “robustly savoury seam inside a spongy bun”, and Sichuanese spiced aubergine is “the apotheosis of smooth savouriness”. “Definitely not to miss” is the Xian City lamb burger, “a saucepan of minced devilment”

In her final paragraphs, Fay drops her trademark adjectives and superlatives, and just lists all the dishes she considers “essential ordering”, and appeals for “more tables” to be added. (*****) 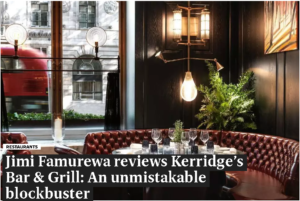 Jimi Famurewa for The Evening Standard is the latest critic to rock up at Tom Kerridge’s London outpost, and he (unsurprisingly) awarded the food a full five stars. Just four stars for the ambience, though – he didn’t seem to love the “grandly pillared room that had been painstakingly pubbified” as much as his peers, and found the service “slick, if a little clenched”.

The much-mentioned Claude’s mushroom risotto with Daniel’s crispy egg was “a masterful, head-spinning balance of delicacy and gluttonous excess”. Butternut squash soup “set off contrasting fireworks (salty! sweet! fragrant!) with every spoonful”. The mains have been much talked-about already: the trio of condiments that come with the “crunchy, hefty chips cooked with Hadron Collider precision”; the omelette lobster thermidor “we admired it from afar”; and rotisserie-cooked rib of beef “disappeared so quickly”.

Yes, it’s an “unmistakable blockbuster”, featuring “cooking with an exhilarating lack of compromise” but possibly too “craftily promoted and laser targeted”?  (9/10) 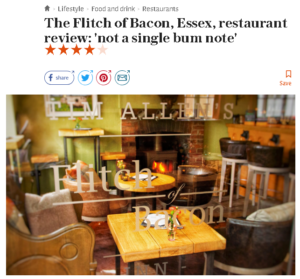 The Flitch of Bacon, Dunmow, Essex

Keith Miller in The Telegraph visited Essex, and The Flitch of Bacon (“under the purr of the Stansted flight path”), a fine-dining former pub from ex-Midsummer House chef Daniel Clifford – although the cooking is now done by another ex-MH colleague, Tim Allen.

The dining room itself has been “purged of any historical features”, leaving a space that’s “neutral, contemporary and comfortable” (and possibly a bit boring?) But the menu is “expertly balanced”, “tangibly grounded in hearty cuts of meat and fish” and “arranged artfully” – with not “a single bum note” in the whole meal. So nearly five stars, just let down by the decor. (****) 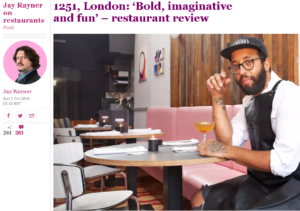 For The Observer, Jay Rayner  visited the new home of “intriguing half-Jamaican half-Scottish chef” James Cochran, the “terrific cook” whose rights to his own name have been unfortunately (but quite legally) retained by his former backers.

There is “an air of just-managed chaos” about this new place, with dishes arriving in “a weird order” and service that “comes and goes” – which is acceptable when the food is fantastic, but less so when “some are brilliant and some are total head-scratchers”. Luckily, overall “there’s enough interesting stuff going on here” for it to be a real problem.

Recommended dishes include jerk spiced hake (a “brave and brilliant dish”), caramelised cauliflower with fermented bagna cauda (“a pleasing bruiser”) and – “the star dish” – an “umami bomb of pork fillet, topped with battered and deep-fried smoked eel”. Even desserts warrant a Rayner “Ooh, yes please and thank you”.

“At his best”, James Cochran “really is touched with brilliance.” All 1252 needs now “is a little focus”.

Jay also visited the grill restaurant at Oxford’s Old Parsonage hotel; possibly the less said about it, the better, but starters were “minimum effort” affairs (“nothing more than shopping and assembly”), followed by “a bunch of grills for the best part of £30″ and desserts that are just a ” broken promise”. All of it “engineered to keep the world at bay” – read his review in full here. 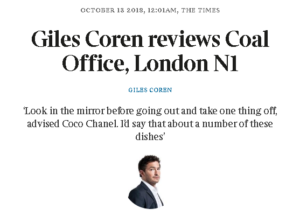 Giles Coren for Saturday’s Times magazine went a little off-topic for a while (what’s new?), ruminating about the disproportionate number of Jewish restaurant critics. But when he got to the point, he enjoyed the “nouveau Israeli” fare at Coal Office, above designer Tom Dixon’s shop and offices in Granary Square (“the vast space near King’s Cross that nobody can find their way around, despite there being nothing really here”).

The restaurant space is long and narrow, with “the whole of the food and drink preparation space along one long, long wall” – “as if someone has taken a very big kitchen and then ripped it open and espaliered it along a wall, like a pear tree”.

The food was all “unquestionably delicious and of very high quality” – kicked off with bread that was “out of this world”. If Giles had a complaint, it would be that “sometimes there is too much of it on each plate” – extraneous ingredients, decoration and pomegranate seeds. (7/10) 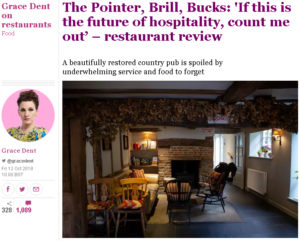 Grace Dent in The Guardian experienced the future of hospitality, the ‘restaurant with rooms’ at The Pointer in Buckinghamshire, a “gorgeously restored country pub… with four tasteful, country-chic, modern rooms”. But she didn’t care for it one bit, from the “punchy prices by Mayfair standards” to the inflexible menu to the feeling that ” no one particularly is in charge”. (10/30) 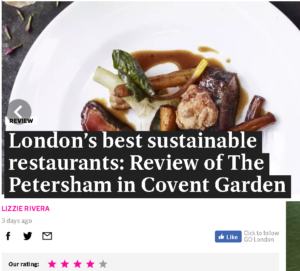 Lizzie Rivera in The Evening Standard is focusing on the most sustainable restaurants in London – this week, The Petersham’s offshoot, part of “a tranquil oasis in the heart of Covent Garden” that’s a “marriage of ethics and aesthetics”. You can “genuinely taste the seasons” and they win a 4/5 for “sustainability considerations [that] extend to every part of this business ” 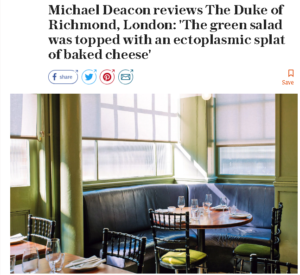 The Duke of Richmond, London E8

Micheal Deacon in The Telegraph enjoyed a visit to The Duke of Richmond, Tom Oldroyd’s pub and dining rooms in London Fields, but was disappointed by the lack of options for vegetarians. 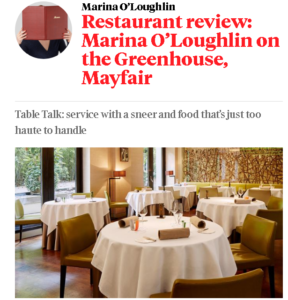 Marina O’Loughlin visited The Greenhouse for The Sunday Times after hearing that a new chef was in place.  She hadn’t even realised it was still open…

The Greenhouse is “very much old Mayfair… no sushi, no clubby beats, no resting-model staff members”. The new chef is “clearly talented in that “fine dining” way where dishes are tiny, exquisite jewel boxes of technique and precision”, but the service let the show down: “old-school in the worst possible way: patronising, absent one minute, too present the next”. She and her two (female) companions are very much made to feel like “unwelcome plebs” – whether because of gender, or the lack of ostentatious wealth, it’s not clear (but neither would be acceptable).

The food is very much “same old same old”, begging the question of what is “this kind of food is for… this performative, tortured, effete, decadent nonsense” (apart from “dick swingers and strange, badgery awards people”).

Tom Parker Bowles in The Mail on Sunday really “wanted to love” St James’s restaurant Boulestin – and “in terms of looks alone, I’m certain that Xavier Marcel Boulestin would have approved” – from the “discreetly pretty facade” to the room “bathed in a lavishness of natural light”.

The restaurant (“a tribute, rather than a sequel”) was rescued from administration earlier in the year; “the good news is that all the staff kept their jobs. The bad news is, well, pretty much everything else.” It was so empty on a Saturday lunchtime, he and the family initially thought it was closed. But they persevered – unfortunately: “While there’s nothing here to truly offend, Boulestin has the sort of cooking that you forget about. While you’re actually eating.” (**)

Tim Hayward in The FT visited Lina Stores, London, the “heir to a phenomenal cultural tradition”: “I want, with all my heart, to say I love it but I can’t. The food is competent, on-brand but soulless”.