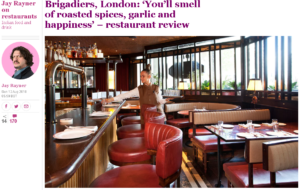 Jay Rayner departed Brigadiers smelling of “roasted spices, garlic and happiness”. It’s the latest opening from the “extremely professional” JKS Restarants, “one of the slickest outfits in the business” (Gymkhana, Hoppers, Lyle’s), located “within the dead-eyed Bloomberg arcade in the City”, and “feels like a direct response to the financial institutions surrounding it”.

The “massive” flavours are the star of the show here, the “the clash, bash and bass drum thump of Indian food with hobnail boots on”; beer snacks to start include “ox cheek vindaloo samosas and red chilli and lemon crisps. They want you to remember you’ve eaten here.”

Jay not only found it hard to forget, but spotted ” lots of things which would encourage me back through the door again” – and even resented sharing a dish of chicken wings “blackened in a furious spice crust and then doused in a thick butter sauce”. Main courses are “huge and meaty… very good, very intense dark brown things on plates” (vegetarian options are available), and all the desserts are ” are variants on kulfi”.

Yes, it’s “a big-fisted Indian restaurant priced for those investment bankers looking for a crafty midweek meal”, but after a few pints of their  sweet-sour Tropical Cyclone Mango IPA, he forgave them. 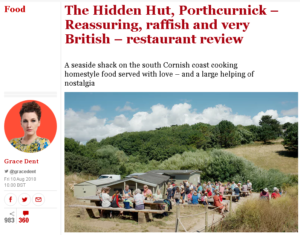 It was off to the wilds of Cornwall for Grace Dent in The Guardian, where she found The Hidden Hut (23/30), “a Cornish beach shack” on the south coast serving up al fresco “Cornish steak pasties, clotted cream ice-cream and fragments of bygone, possibly misremembered British summers”.

The fare is “recognisable and reassuring, but with dashes of pizazz” – from ” smoked haddock and mussel chowder… served with local samphire”, chipotle beef chilli (with “added feta and… herb-speckled bulgur wheat, culinary brouhaha that flies in Stoke Newington, but in Porthcurnick it is positively raffish”) and “a very, very good, moist vegan banana bread”.

The Hidden Hut runs very popular ‘feast nights’ that go ahead whatever the weather, because, as Grace says, “what is Britain without people stoicly eating mackerel in sideways drizzle?” 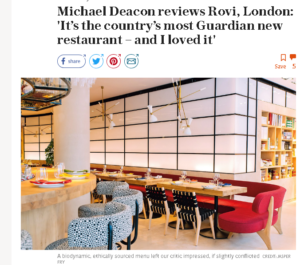 Micheal Deacon in The Telegraph started a literary food fight at Rovi, which he described in one word  as “Guardian”; “every sustainable, ethically sourced fibre of its being is pure Guardian.”

From the owner (Yotam Ottolenghi, “who’s been contributing recipes to the Guardian for over 10 years “) to “the area near the door… flogging the most fabulously middle-class produce” to the “environmentally responsible” heat recovery system that ” failed and died” within days of opening, it’s “country’s most Guardian new restaurant (It’s in London. Of course it’s in London).”

Despite the endless shade-throwing, Micheal loved Rovi : “the food is terrific” – “every dish has so many layers… and subtleties.” He ate the crumpet lobster toast (fast becoming an iconic dish) which was “outstanding” – “floatily soft and… satisfyingly crunchy”, the celeriac shawarma (or “Guardian kebab”) and ” feather-light” ricotta doughnuts.

Micheal Deacon might be away next week, on a yoga retreat knitting “a kaftan out of couscous”. 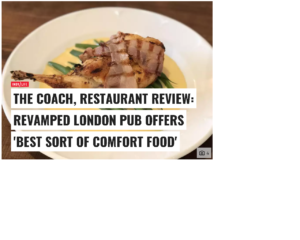 There are bar snacks, including “sausage rolls [that] can be ordered by the inch”, but the formal dining areas transform it from “posh London boozer” to “immaculate French bistro experience”. Ed’s advice is to “go rich” on a menu that contains three types of duck. Not ideal heatwave fare, maybe but “the best sort of comfort food”. 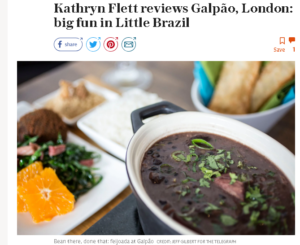 In The Telegraph, Kathryn Flett ventured to “the capital’s “Little Brazil” – inappropriately situated, compass-wise, at the unlovelier north-western end of the Harrow Road”, where she enjoyed “the subtleties of Brazilian cuisine” (though sadly without a caipirinha) in the form of “peixe frito inteiro – fried sea bass with rice, beans, salad and fries”, which was “just perfect”. 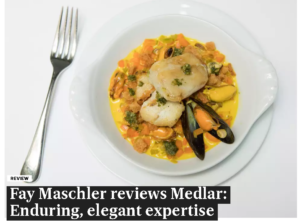 Fay Maschler for The Evening Standard visited Chelsea’s Medlar (****), a “comfortably bourgeois venue” from a former Chez Bruce chef and manager team, which “opened in 2011 to universal critical acclaim”.

There’s a set-price menu and “no dicking around with small plates and sharing” in a meal that still “astonishes and delights” (including an “absolutely fabulous dessert” of crème fraîche ice cream and honey-roast apricots) – the “lack of rigorous authenticity has a thrill all of its own”. At the end, Fay says, “there will always be room in my heart for the steady expertise of restaurants such as Medlar”.

There’s much al fresco dining this week for Fay, including the newly opened Soane’s Kitchen at Pitzhanger Manor, food from Max’s Sandwich Shop delivered to Finsbury Park and a picnic at Blenheim Palace. 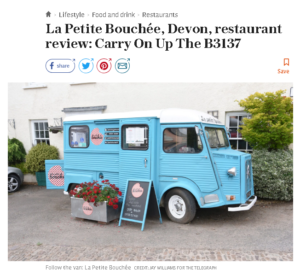 In The Telegraph, Keith Miller travelled to Devon and La Petite Bouchée (***) that started life as a pop-up 4-seater restaurant in Crystal Palace, in the “impossibly picturesque blue Citroën minivan” that’s now parked outside the main restaurant. There’s “still a strong whiff of the supper club about the way they run things” – they are only open two nights a week, and you have to choose what you’re eating when you book.

There’s “just something very lovely and plucky and original about the whole enterprise”; the “archetypal brasserie food” comes in “reassuringly copious quantities”. But the no-choice format and reliance on regulars left the reviewer feeling that, despite the “easy informality”, it wasn’t spontaneous enough to be a “proper French restaurant”.

Joel Golby in ES Magazine visited Hackney for a burger at Hot Newcomer Carte Blanche, which “still rocks the pink banquettes, inexplicable route downstairs and weird narrow shape” that belonged to former incumbent Rita’s (RIP). His “bone marrow and truffle cheeseburger” could have been “an overwhelming meatfest”, but was actually “unctuous, subtle and perfectly textured”. The starters of Nashville fried oysters and cauliflower buffalo wings are highly recommended – all in all, “a welcome addition” to the area. 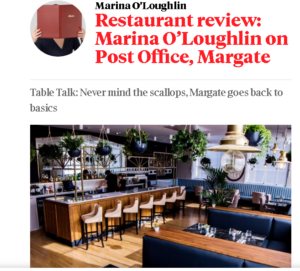 The “executive chef” is revealed as Tom Griffiths of Flank in Brighton and Spitalfields; Post Office is “not as good” as them, but maybe just “fine” – certainly the ” noisy mix of natives and incomers seems happy enough”, and less bothered than Marina about the “well meaning but largely clueless” staff.

Tom Parker Bowles in The Daily Mail gave us a run down of his favourite Sunday Lunch haunts.

Nicholas Lander for The Financial Times ate at Tokimeite, a Japanese restaurant in Mayfair, where “the tempura came with a dipping sauce so alluring that we refused to give it up”.

Tony Turnbull (and his dog) in The Times magazine visited Ottery St Mary in Devon, and ‘feasting house’ Rusty Pig, on the recommendation of a River Cottage chef (owner Robin Rea, who grew up in Ottery St Mary, also worked there for a time).