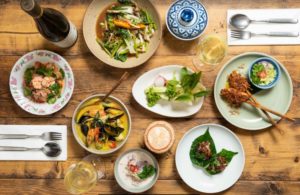 Thai restaurant som saa has announced it will now be taking reservations, and is also launched a new tasting menu. The menu, which features dishes known as ‘Tem Toh’ (translates to ‘full table’), will act as a tour of Thailand, encompassing many of the country’s regions. An announcement said there will be an emphasis on […]

Situated in the heart of St. Helier, Jersey’s beautiful seaside capital, and walking distance from some of the island’s most breathtaking beaches, The Club Hotel & Spa boasts a truly unrivalled location. The hotel is home to the outstanding Michelin starred 5AA rosette Bohemia Bar & Restaurant, which has firmly put Jersey on the gastronomic […]

Drinks supremo Tony Conigliaro will partner with Japanese beer brand Asahi Super Dry to launch the ‘Moon Garden’ at his Dalston restaurant and bar, Untitled, this summer. Opening on Friday 18 May, the Asahi Moon Garden will be a 20-cover outdoor area accessible to the rear of Untitled, giving guests the chance to enjoy al fresco […] 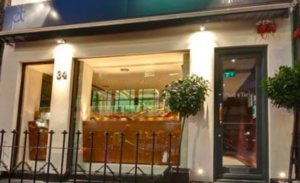 For one night only David Moore’s “unfailingly impressive” Fitzrovia stalwart Pied Ã  Terre will host a collaboration dinner designed by head chef Asimakis Chaniotis and Pascal Aussignac from Clerkenwell’s recently refurbished Club Gascon. Guests will enjoy an eleven course tasting menu and get the chance to meet both chefs throughout the evening. Asimakis and Aussignac’s passion […] 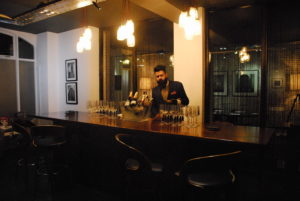 This week (Wednesday 1 November) Harden’s hosted a sell-out dinner with acclaimed chef and restaurateur Glynn Purnell at his renowned Birmingham restaurant. The event celebrated 10 year’s of brilliance at Purnell’s with a menu devoted to Glynn Purnell’s greatest hits – including two of his winning dishes from the BBC’s Great British Menu series. The […] 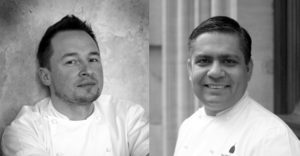 A collaborative dinner between Texture chef-patron Aggi Sverrisson and The Cinnamon Collection’s (Cinnamon Club et al) Vivek Singh will fuse modern Indian and Icelandic cuisines. Sounds interesting? Tickets are now available for this one-off collaboration at the Cinnamon Club on 21 June. It is one of a series of guest chef dinners to be held at the grand Westminster […]

What a short memory the food community in London seems to have. There has been a huge amount of press trumpeting the arrival of ‘London’s first dessert restaurant’ as Café Royal on Regent Street prepares to relaunch The Café in March as a venue for sweet treats only. Does nobody recall the Pudding Bar on […]

The 200 Club @ The Factory on Tanner Street, Bermondsey 3-4 September Do you love the variety and surprise of a lengthy tasting menu, or loathe the endless parade of minuscule portions? If the former you’ll be salivating at the prospect of a new partnership between ‘culinary deviants’ Bompass & Parr and Bespoke Offers – a […]

There are still a few days of English Wine Week left and to really make the most of them Lamberts will host a nightly tasting menu with wine pairings showcasing the best bottles our vineyards have to offer. A regular favourite with our reporters, this popular Balham restaurant “excels in every way”. From Tuesday 26-Saturday […]

Marylebone’s Canvas, which opened six months ago, has closed and relocated to the former site of Le Cercle. Chef/restaurateur Michael Riemenschneider will relaunch the restaurant on 2 September in Wilbraham Place, just off Sloane Square. The new Canvas will not only be bigger (60-80 covers instead of 20) and less central, it will also (crucially) […]