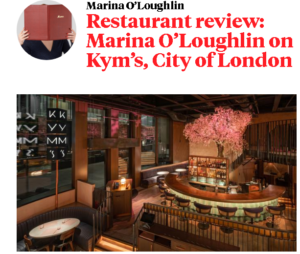 Marina O’Loughlin visited Andrew Wong’s City newcomer Kym’s for The Sunday Times, “an opening… hotly anticipated by restaurant lovers” (and what she calls his “potentially difficult second album”). Could he pull off his Pimlico triumph (the “electrifying” A Wong) in the “expensive banality” surroundings of the Bloomberg arcade?

Despite being “mildly devastated” that there’s no dim sum, and that it’s “a very different proposition” altogether, with “star billing” given to Cantonese-style roasted meats, “it’ll be no shock to anyone that I like the food at Kym’s very much”. The meat is “canonical, quintessential”, prepared as “classics done with excellent produce, the result of lengthy, complex cooking”; “spectacularly fine drinking food”.

The arcade itself is “a credible destination”, but Ms O’Loughlin couldn’t quite shake off that “I tend to come out… feeling not so much fed as processed”, as with so many “large, modern restaurant developments” with an eye on expansion a la Dishoom. But why not? “Kym’s is a palpable, scalable, eminently saleable hit.” 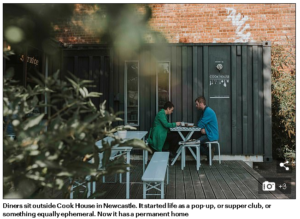 Tom Parker Bowles in The Mail on Sunday continues his ‘pioneering’ adventures around the North east with a visit to Newcastle’s Cook House, in a Byker shipping container. A successful Kickstarter campaign to buy permanent lodgings will see them move and expand soon, but for now there’s “breakfast and lunch at prices to make you blush” in a garden setting with “with pretty blue tables, a wood-fired stove and a tiny kitchen”.

From the blackboard menu TPB chose a roasted red pepper soup that was “the very quintessence of comfort” and a chicken salad (“so often a byword for boredom”) that was a “messy, magnificent mélange”. He heaped praise on a pork belly sandwich – “the beautiful bastard son of English doorstep and Vietnamese banh mi” which “hollers and whoops with rambunctious delight”.

And all at £31 for two (with BYO wine); ” Yet another kick-ass Newcastle feast. Every neighbourhood needs a Cook House. Food that makes the senses sing. Without making the wallet sting.”  (****) 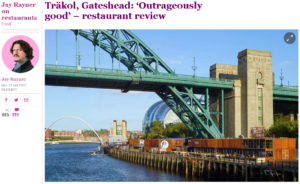 For The Observer, Jay Rayner  followed in the footsteps of The Mail‘s Tom Parker Bowles (not a sentence we ever imagined writing) by visiting Träkol, in the shipping container community under the Tyne Bridge.  He loves it: a “ragingly modern restaurant determined to feed you with the seriously good stuff”; “dominated by a huge charcoal grill”, Träkol is “a place you want to eat in”.

Grilled pork jowl with XO slaw is pungent and crispy, “one of those dishes that you think about when you wake up the next day”; but “they can also do delicate, allowing Lindisfarne oysters to sing under a bright Nam Jim dressing”.

For carnivores like Jay, “the real fun lies under the heading ‘Feasting'” – one dish involved a roast half pig’s head, another, whole grilled turbot (“It takes serious skill and nerve to grill a beautiful fish like this and get it right”). There’s “long list of beers” from the company’s microbrewery to wash it all down with. “Just go with enough people to do it justice” – portions are super-sized. 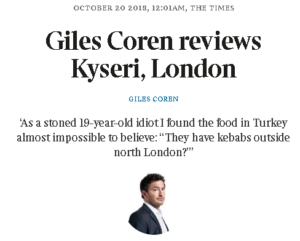 Giles Coren for Saturday’s Times magazine waffled about backpacking through Turkey as a preliminary to his review of Turkish newcomer Kyseri; he’s followed the “blessed hands” of chef Selin Kiazim through her Haggerston pop-up Trip Kitchen and Shoreditch’s Oklava. Her new place is “very Fitzrovia-y as a restaurant, being small, efficiently and prettily designed, full of natural light”, and serves up “wonderfully Turkish” cuisine, with a focus on pasta.

He seems to have already sampled much of the menu before the ‘Sultan’s Delight’ appeared; an “exquisitely dense collapse of slow-cooked short rib into a puree of aubergine and eski kasar cheese, whose richness and meatiness very nearly killed us”. All complemented by a “wild and brilliant” wine list and finished off with “absolutely terrific coffee”. (8/10) 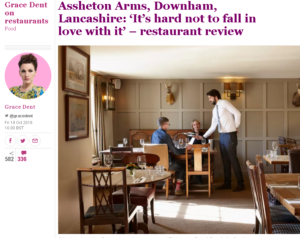 Grace Dent in The Guardian travelled past the Lakes (full of “joyless experiences”) to “the magical Ribble valley” which “hides in plain sight as Britain’s finest jewel for the tourist-who-does-dinner”. (“Special mention should go to the Parkers Arms at Newton-in-Bowland.)”

Grace found it “hard not to fall completely in love with” The Asshenton Arms in Downham Hill, “at the foot of Pendle Hill”. It’s a”glorious, stone-fronted building”; inside there’s “a log-burning stove and flagstone floors” and an “effusive welcome” and a long menu “written afresh every day”; “the perfect place to check out of city life and rehabilitate alone”. (23/30) 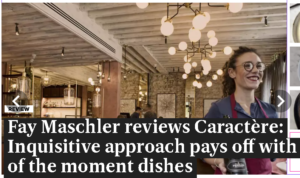 The Evening Standard‘s Fay Maschler has pipped the other critics to several new restaurants recently, and this week it’s the turn of Caractère, the restaurant of Diego Ferrari (formerly of Le Gavroche) and Emily Roux, daughter of Michel Jr.

She praised several of the dishes over the course of two meals, but not everything pleased Fay: the “small size of the serving[s] disconcerts” (but left room for the “extraordinarily good” chocolate cake at dessert). One dish – oxtail ravioli – she even described as “condoms on an island of cubed root vegetables” and “a hazard warning to the tastebuds”.

The cost (over £300 for a tasting menu with matched wines for two) seemed high – but well-aimed for “the American banker strata of the new Notting Hill” in which the restaurant is located. Fay even found fault with the “overlit dining room”, “spindly cutlery that gets ever more bizarre” and the draughty door. Teething problems, maybe – but she liked Caractère (or maybe just its pedigree?) enough to award it four stars. (****) 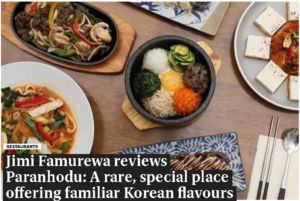 Jimi Famurewa for The Evening Standard visited his local Korean restaurant, “an unadorned but welcoming room” in a row of shops south of New Cross. The menu “covers a tight edit of all the things you’d expect… alongside flashes of beguiling weirdness”.

The starters, including “tremendous pumpkin croquettes” covered in a “robust” katsu curry “devolved conversation to a series of happy grunts”. The hot stone bibimbap was “an incredible rendering” decorated with “Paranhodu’s own fearsome, gochujang-based hot sauce”. With a local cult following, it “feels like a rare, special place” – but only if you’re in SE14. (7/10) 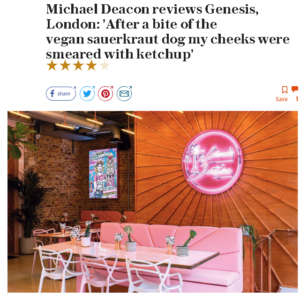 Micheal Deacon in The Telegraph went meat-free and messy this week with a visit to new plant-based restaurant Genesis, where the menu is ” quite something” – and that’s just the design and the Mayan prophecy. he was less surprised by the ” kale mojito, spirulina colada and coffee made from mushrooms”. (****) 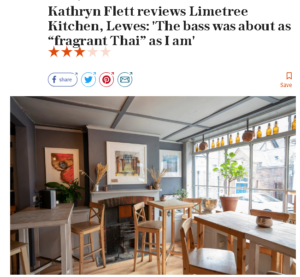 Kathryn Flett in The Telegraph was underwhelmed by her visit to Lewes (which “exudes smugness in extremis”) and Thai restaurant Limetree Kitchen – despite the website’s pledges of ‘exceptional dishes’ and ‘the ultimate eating experience’, “it was all… just fine”.

She managed to sum up her visit to Thai restaurant Limetree Kitchen in one sentence: “a good if slightly-too-expensive local restaurant, and if I lived around its corner I’d be pleased it existed.” (***)