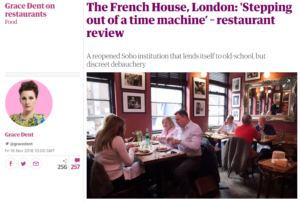 Grace Dent for The Guardian visits The French House in Soho with some reluctance: it’s a “hollow task to review a restaurant that has tottered on already… for more than 100 years”. But with Neil Borthwick freshly installed at the reigns, she felt obliged to check that he was respecting this last bastion of Soho’s decadent past.

The music-free dining room above the “likeably shabby “French-themed” boozer” consists of “12 or so small, practical, old-fashioned tables”, one member of staff and a “short, pleasing, changeable menu” – “by central London standards, this feels like stepping out of a time machine”.

Borthwick’s “classic, earthy cooking” is “French-ish” (with “scant few offerings” for vegetarians); “it is a damned good lunch”, perfect for accompanying some serious day drinking, even on a Monday lunchtime. “The French has lasted a century by being fully supportive of such wanton behaviour. It is safe in Borthwick’s hands.” (24/30) 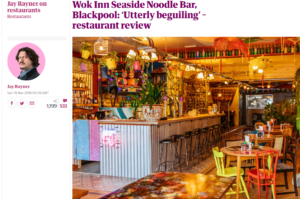 Jay Rayner, The Observer’s man about town, went on a Proustian nostalgia trip in Blackpool, where the BBQ ribs reminded him of being seven years old again.

The restaurant’s owners describe it as “a cross between a Budapest ruin bar and a Penang hawker centre”, but as Jay has been to neither, he just sat and appreciated the “garishly decorated” walls and read the menu that “wanders Asia, like a backpacker on the run”.

Some dishes are “duff notes”, others are “joyous and enthusiastic and brave” (especially considering the location): salt and chilli duck tongues, beef rendang served in stacked tiffin boxes, and those BBQ ribs “long and slender and drenched in a glossy sauce the colour of the varnish on an expensive hotel lobby coffee table”. 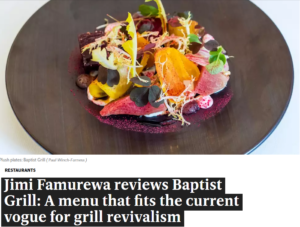 As the name suggests, the menu “fits the current vogue for grill revivalism”, but the décor doesn’t chime with the rough-and-ready, industrial look of many of London’s other meat-centric restaurants. The setting here is an opulent domed room “where the design brief seems to have been ‘Laurence Llewelyn-Bowen, properly off on one”.

Luckily, “this mad, aesthetic maximalism is contrasted by straightforward food”, which means well but just misses the mark: “none of it bad especially. But none of it particularly innovative or precise or decadent enough to leave much of a dent.”

Jimi sums up Baptist Grill as “plonked… in an uncomfortable no man’s land serving mildly tweaked grill dishes in an incongruous Liberace-grade boudoir”. (6/10) 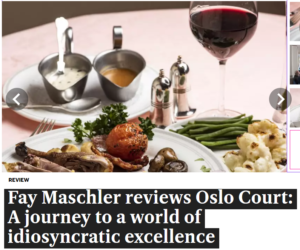 Fay Maschler for The Evening Standard honours the occasion of collecting her late husband’s ashes by lunching (twice) in one of his favourite restaurants, Oslo Court, enjoying the “consoling time-warp sensation” of the “frou-four” décor, long menu, silver service and modestly marked-up wines.

One of her guests described the place as “quirky, energetic, dependable, clever, exciting and unexpected, full of humour with a sense of decency, politeness and of fun” – just like Reg. (****) 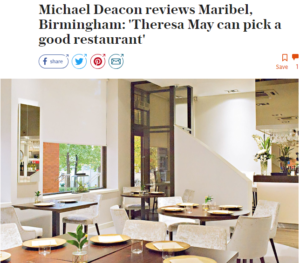 Micheal Deacon in The Telegraph visited Meribel the night after Theresa May had celebrated her birthday there. She made a good choice – the food was “stupendous”.

A choice of set menus delivers the “blend of French and modern British” food – with no less than five amuses bouche that were “exquisite” (“the only word that simultaneously captures how tiny these things were and how delicate, and how perfectly crafted – as well as how terrific they tasted”).

Even better, “the same applied to the courses that followed”: “meltingly creamy” mackerel with potato, “slippery, sweet and salty” sea bass with fennel, “tender, rich and nutty” veal with artichoke. And two puddings, equally exquisite.

Only the airport-hotel décor with the “view of a drab and lonely square” and a “dead” atmosphere let Maribel down. It deserves to be better known and “to be rammed every night”, not just when the PM’s in town. (****1/2) 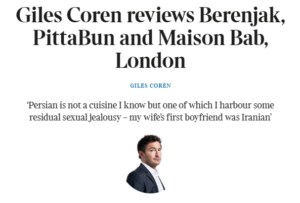 Giles Coren (for The Times) again reviews three restaurants in one column, to give readers a “reasonable spread of options”. This week: kebabs, all within a bike ride of each other in central London.

Kian Samyani, the Iranian chef at Berenjak, has been backed by former employer Karam Sethi of the JKS restaurant group. “The place looks great” – exposed plaster, tiles, leather banquettes and marble tables – which Giles thought was “exactly like the traditional hole-in-the-wall kebab shops of Tehran might be”, only he’s never been.

Giles also tried out PittaBun’s “modern Greek streetfood” (“more like a little McDonald’s, with a short, very Anglo menu”), which was overpriced, even for Carnaby Street, and Maison Bab’s “mind-blowing” 15-hour pork shawarma (“the sweet and sour, the rattle and hum. My mouth cried. My heart did somersaults.”) and fondue fries (“Oh. My. God.”). (8/10) 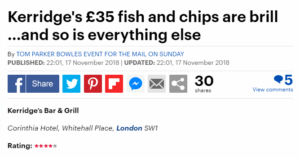 Tom Parker Bowles for The Daily Mail follows a now well-worn path of critics to Tom Kerridge’s new London hang-out. No prizes for guessing that he awards four stars…

He described the place as “more club deluxe than pub”, ate the famed Claude’s mushroom risotto with Daniel’s crispy egg (“an astounding depth of forest-floor allure”), £35 fish and chips and – at another visit – crab vol-au-vent, with pastry of “astonishing lightness”: “a classic Kerridge dish, where elegance and power stroll merrily hand in hand”.

Marina o’Loughlin for The Sunday Times was in New York, dining at the Grill, which she really wanted to dislike, having been ejected from another restaurant by its owners in times gone by. “Is it worth it? I’m afraid it is. I’ll genuinely never forget the experience. I feared it would be Trumpy; it’s not — it has class.”