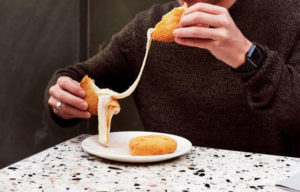 Stevie Parle is soon to open a second Pastaio in Canary Wharf. The new restaurant will launch on November 26 in a space formerly occupied by Pocho.

The second Pastaio will serve much the same as the Soho site, with plenty of deep-fried ‘nduja and mozzarella, pasta plates and Italian sausage. Whether the queues will be as long remains to be seen.

Canary Wharf, once a steel and glass barren wasteland of a dining arena, may yet be quite rivalling Soho in the going-out stakes, but now has something to offer thanks to Street Feast spot Giant Robot. Pastaio will be among Thunderbird fried chicken, Little Jose, and Yum Bun.

Parle said: “I’ve been a member of the London Union advisory board for a few years and and am really excited to be involved with one of their places now as an operator.

“Nobody delivers the holy trinity of food, booze and music with the scale and quality of a street feast site and I’m happy to add some pasta into the mix with the other awesome traders.

“We’ll be experimenting with click and collect as well as Deliveroo from Giant Robot and it will be great to see how Canary Wharf responds to some proper pasta.”

Parle’s Italian empire is growing. The restaurateur also has Rotorino, which has suffered some poorer reviews in the last 12 months or so, and Palatino, which has been seen more favourably.

Parle’s more “straightforward” and “efficient” style seems to lend itself to his Roman dishes, which are nearly always said to be delicious.