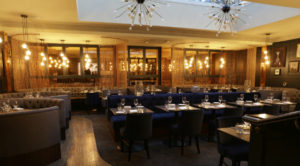 The 100-cover restaurant site that was once The Woodford is to reopen as The Gallery on November 27, serving lunch and dinner until late.

The Pierre Koffman protégé (and former Young Chef of the Year) Ben Murphy – then just 25 – had been backed by Essex restaurateur Steve Andrews to open the restaurant in South Woodford.

It was set over two floors and boasted an oyster and seafood bar and a menu inspired by classic French techniques and British produce.

Readers liked it, talking of an “ambitious” restaurant that was “a fabulous addition to an area which surprisingly lacks an upmarket establishment”. Many said The Woodford was “a star on the edge of London.” Reviews and awards poured in.

But Murphy left, and soon the much-hyped location, then operated by M & Co Services, went into administration in March 2017 after an impressive but apparently money losing spin.

Landlord R and I Properties relaunched the site as LDN Grill in July 2017, but it closed for a second time and was snapped up by Hassan Yildiz’s Hotspot London in August 2018.

Now, it’s set for another comeback under head chef Dave Rann. He was formerly head chef at contract caterer Rhubarb, the Juniper Tree in Belsize Park. The latter has always divided the crowd.

Rann’s iteration will apparently feature a modern British menu comprising grilled meats and seafood and a variety of vegan and vegetarian dishes.

Rann told The Caterer: “After months of planning for the opening, I can’t wait to welcome guests to the Gallery, for the chance to sample some of my favourite dishes and the moreish wines and cocktails available from our two bars.”

Taste of London cancels summer edition
St Pancras Hotel group offers NHS staff free board
'UK must have a united restaurant reopening plan', UK Hospitality warns
Micheal Gove says hospitality businesses are up against it when they reopen - but they will, and soo...
Share this article:
Facebook
Twitter
Join the Community
Join for Free