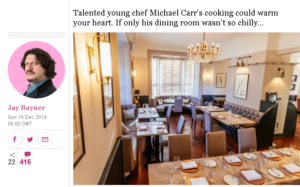 Jay Rayner  for The Observer waited for 20 minutes at Restarant 92 before any food arrived on the table – and that was just bread. He’d been delayed on the train and was very cold – not the best start.

Luckily, Micheal Carr’s cooking won him over, with its “fun ideas”, “enthusiasm” and “admirable risks”. Even the bread was “to be taken seriously”, rich in animal fat and “luscious”. There were distinct moments of “unevenness” – not really acceptable at £55 for three courses.

Jay’s starter (45 minutes in) of rabbit and carrots was “whimsical, but also unembarrassed about huge flavours”, but two fish dishes came overcooked (with undercooked potato). And “desserts feel like initial sketches, in need of further thought” – in fact, “mostly, there is the feeling here of an ambitious restaurant which could be great, but which right now isn’t quite sure how to become so.” 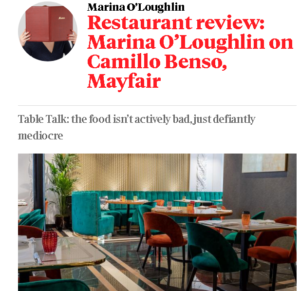 Searching “for something to make us all unequivocally happy” Marina O’Loughlin in The Sunday Times plumped for this Mayfair Italian (imported from Milan) over bleeding vegan burgers, crazy golf, caviar and Japanese-Italian fusion (all genuine recent openings in the Big Smoke).

She didn’t receive the warm embrace of Italian cuisine and hospitality that she craved: “the interior is as brooding and formally unwelcoming as the staff”, the food”isn’t actively bad…it’s just defiantly mediocre” and “wines are marked up with all the enthusiasm of a rogue plastic surgeon”.

“Camillo Benso is a truly special place. It has the remarkable effect of making me feel retroactively better disposed towards Jamie’s Italian.” 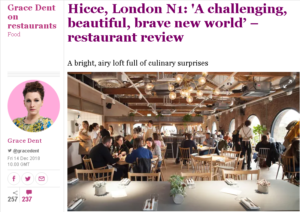 “Restaurants in shops are generally awful… a corporate solution to empty space .” Or so believed Grace Dent for The Guardian until she visited Hicce, above a shop that’s just one of the ” “curated” brands residing among the elegant Victorian brick walkways ” of the new-look King’s Cross.

Hicce is, thankfully, an “entirely separate entity, and a beautiful one, too”, with ” the feel of a capacious, repurposed Manhattan loft”.

The menu, split into lots of different sections, is “challenging”: “each dish is a cacophony of new flavour combos” such as mackerel with kumquats or squid with apple pork collar and reblochon. But she liked it “very much” – “cocktails are marvellous; the new, young, bright-eyed staff are warm and attentive” and Pip Lacey’s muscovado creme caramels are “magical” and “life-changing”. And that mackerel is “an enjoyable, bittersweet slap across the face”. (25/30) 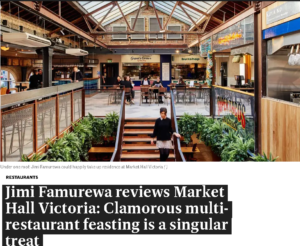 A word of warning, though: it’s a “hectic, intensely casual experience”and a “communal, clamorous, anathema-to-dining-traditionalists sort of a place”, possibly even a “noisy, churning scrum”.

The food offering is a “cannily selected mixture of beloved outfits, covetable spin-offs and fledgling concepts”, with the exception of a few mis-hit dishes. Jimi recommended seasonal vegetable agebitashi from Koya Ko (“a mottled, ginger-rammed wonder of a broth”), Devilled fried potatoes from the Marksman pub’s Bunshop (with “an addictive, lip-prickling kick”) and pretty much everything from Roti King. (7/10) 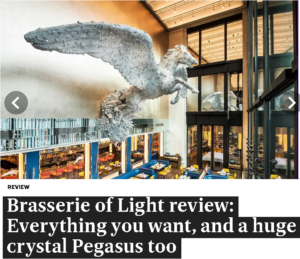 Brasserie of Light is “the latest offering from Richard Caring’s Caprice Holdings” – effectively it’s “another Ivy but one under another name” – and “out-of-towners’ delight” with “an immense crystal sculpture [of Pegasus] by that triumphant chancer Damien Hirst“. In fact, “no expense has been spared in making sure the brasserie delivers”, from interiors to the formally dressed staff.

Food ranged from “nothing to startle” to “really good ” via “enjoyable” (The Ivy ‘s classic dishes have been omitted to make the place seem more upmarket) and drinks were “fairly priced”. (****) 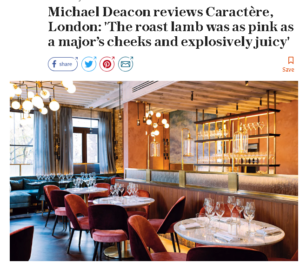 Despite the quirky menu headings (he found the Greedy heading on the puddings list especially off-putting) Michael Deacon for The Telegraph found Caractère “absolutely top-notch”.

From “meltingly dreamy” scallops from the ‘Curious’ menu and risotto that was “fat cheesy blobs of pleasure” on the “Subtle” menu, everything at Caractère is “really good” – they just don’t ” need the gimmick” with the menu. And “the ‘Greedy’ puddings, incidentally, were excellent”.  (****1/2) 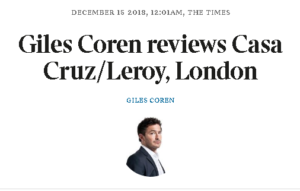 Even Giles Coren (reviewing for Saturday’s Times magazine) was a little startled at the bill for 6 people at Casa Cruz, a three-year-old restaurant in Notting Hill (“where all the rich foreign weirdos who live round there go for dinner most nights”). It came to (just) over £1000 – “I think the other diners were as surprised and horrified as we were”.

Yes, “it’s got a bowler-hatted doorman, copper walls, mirrors everywhere and is all kind of nightclubby” (or, alternatively, “Moscow karaoke brothel decor”), “a glamorous owner” and celebrity clients, but is anything worth that bill? (9/30)

To help him recover from the shock, Giles – what else? – went to another restaurant, this time Shoreditch’s Leroy “for a swift hipster lunch”. He ate “lush homemade goose rillettes”, ” sweet, fat clams in cider” and a “really nice, warming saucer of soft pumpkin”, along with a few other sharing plates. So how did they spend over £100 a head? (18/30)

Maybe it’s time for the multiple reviews to stop…

Tom Parker Bowles for The Mail on Sunday visited the dining room above veteran Soho pub The French, “the anti-Wetherspoons, an idiosyncratically Gallic honeypot around which buzz Soho’s eternal flâneurs”, where Neil Borthwick (ex-Merchants Tavern) “recently slipped in with the minimum of fuss”.

The FT in its “Charts of the Year” feature on 2018 said “Diners say ‘no thanks’ to high street chains: shops and restaurants alike suffered a difficult year marked by site closures”.