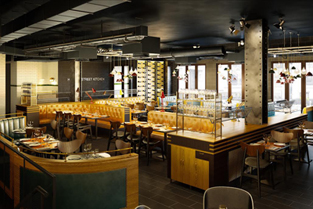 Gordon Ramsay today (10 November) launched his first ‘heart-of-the-West-End’ operation, Heddon Street Kitchen. Modelled on City outpost Bread Street Kitchen – not, it must be said, much favoured by Harden’s reporters – it is located on the former site of a Living Room bar and restaurant, just off Regent Street.

Heddon Street, the Gordon Ramsay group’s 13th UK site, features all the usual mod cons – open kitchen, Josper grill, raw bar, terrace dining etc – plus a few more things besides, such as a wine-tasting counter and ‘chill-out’ ice cream bar (which serves alcoholic ice cream cocktails alongside sundaes). The décor all sounds rather gentleman’s club-esque – the press release is peppered with terms like ‘brooding’, ‘machismo woods’, ‘shimmering steel’ and ‘devilishly handsome’ – one wonders if this isn’t how Gordo likes to see himself?!

Continuing his commendable habit of installing women at the helm of his kitchens (Royal Hospital Road, London House), Ramsay has appointed Maria Tampakis (formerly of Bread Street Kitchen) as head chef at Heddon Street. It will be an all-day dining affair serving breakfast, lunch and dinner and brunch until 3pm at the weekends.

The restaurateur seems in an expansionary mood at the moment. Earlier this year, he showed his sentimental side by buying the site of Aubergine (the Chelsea spot where he spent his formative cheffing years) and also opened a Bread Street Kitchen in Hong Kong. And Ramsay isn’t stopping there, he will open a second Asian Bread Street Kitchen in Singapore next year and is currently seeking a place to launch a third site in Macau, according to the government’s Official Gazette.