A week full of hits – Jay Rayner is predicting The Next Big Thing, Grace Dent awards her highest mark yet, Kathryn Flett has a 5-star time in Margate and the Evenings Standard’s week of reviews are all raves. Only TPB hits a slighty low note with Core, which gets 4 stars but no real sense of delight comes through in his review. 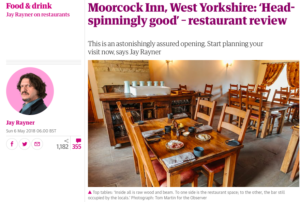 Jay Rayner in The Observer lets us all in on what he thinks will be ‘the next big thing’ – the Moorcock Inn, Yorkshire

“You will soon hear an awful lot about the Moorcock Inn… the most self-assured and self-possessed, poised and absurdly wistful launch in years.

“…changing bar menu included… trotters on toast, horseradish fritters with rose pickles, and platters of their own charcuterie.

“Australian/British chef Alisdair Brooke-Taylor, and Aimee Turford, who runs front of house, spent years together at the highly regarded In De Wulf in Belgium.

“…the locals…can’t stop themselves telling you just how bloody delighted they are that this pub has happened to them… a venison Scotch egg is a shamelessly crisp boulder of a thing. Each [dish] is just a couple of thoughtful ideas working together.

“…whatever the ambition, this is still a pub. They serve pork scratchings and beer. At weekends they have seafood barbecues. It’s a schlep up the hill to get there.

“They just want to do their thing. By God are they doing it well.” 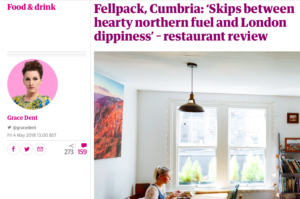 Grace Dent in The Guardian has no complaints about the fusion of country and city slicker-appeasing fare at the Fellpack Inn, Cumbria…

“Fellpack, in the north Lakes, which opened in June 2017, feels gloriously fresh… a bright-spirited, welcoming bistro run by a jubilant bunch of youthful, mountain-fixated friends.

“An acceptably wobbly chunk of pork belly came atop a deftly seasoned, Spanish-influenced butter bean and chorizo braise. Fellpack is not afraid of heat, spice, bold combinations and allowing a quiet majority of its menu to be veg-centric. A cumin-and-paprika-enlivened fellpot of lentil and mixed bean chilli with jalapeño and chives was no drab vegetarian affair.

“If you’re going to the Lakes this summer, book now.” 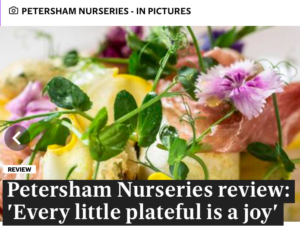 “Petersham Nurseries in Richmond started by chance… fresh, seasonal, pretty dishes, much decorated with flowers, leaves and herbs… enormous expansion into the heart of Covent Garden — 286 covers in total.

“The Petersham is the super-swell one: a big exhilarating space. It’s almost like being at an amazing wedding.

“…all about seasonality and sourcing…Italian-inflected cooking.

“…it’s a big new place and some of the execution and service seemed a little imprecise as yet…almost more exciting to look at than to eat.

“La Goccia, the grill and bar on the other side of the courtyard, is cheaper but still far from cheap… absolutely loved it… every little plateful from the open kitchen a joy… there’s a lot of pleasure here without too much to eat… just a great Italian joint.” 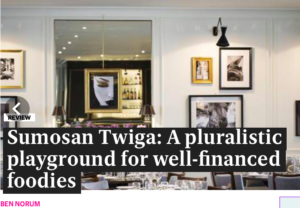 “Sushi and burrata… sit side-by-side surprisingly comfortably… the menu is simply split down the middle between Japanese and Italian. There are even two chefs.

“…a tie-up between Sumosan… and Italian businessman Flavio Briatore’s equally acclaimed Twiga in Monaco… the result is ponzu, parmesan and polenta sitting pretty together. And that’s no bad thing.

“… what’s surprising is how much crossover there actually is between Japanese and Italian food… pricey and it’s peculiar, but it’s good fun.” 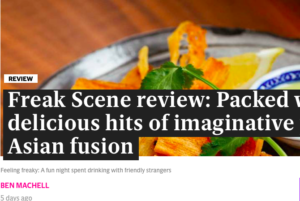 “…chilli crab and avocado wonton ‘bombs’… were fresh, crisp and so perfectly balanced.

“…the walls are plastered in NWA and Metallica posters, The Pixies are blasting on repeat… fresh, flavour-packed and fun as a night spent drinking with friendly strangers.

“Like everything here, you start eating, thinking, ‘Wheeey, this is a laugh!’ but finish thinking, ‘This is actual witchcraft.’ We left greasy-lipped and ridiculously happy. You will, too.” 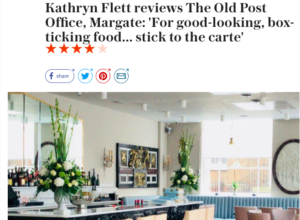 Kathryn Flett in The Telegraph may think The Old Post Office, Margate, slightly incongruous, but she still gives it five out of five…

Where does one eat in Margate? she asks…

“…any number of hip chippies and smashed avocado joints, but what if you’re a bit over the upcycled brunch vibe?”

“…as unlikely a new restaurant as I’ve ever seen in a benighted English seaside town): The Old Post ­Office.

“TOPO has Wedding Venue written all over it.” 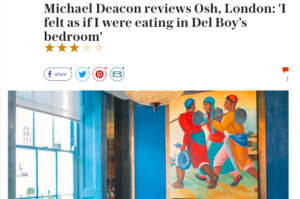 Michael Deacon in The Telegraph feels “as if I were eating in Del Boy’s bedroom” at Knightsbridge newcomer Osh, which fuses traditional Uzbek cuisine with international dishes… 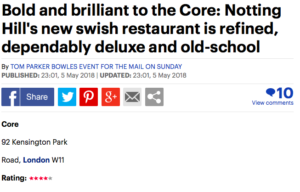 “…lashings of billionaire beige, acres of expensively blond wood… men in black suits, whole armies of them, who linger, with exquisite politeness, at every turn… for all this three-star pomp, Core wants to be laid-back too.

“…we go for the full 12 courses at £105, sans wine… snacks arrive on some form of sylvan still life, great banks of moss which contain a tiny, beautifully rendered foie gras tart. None of these dishes is more than a mouthful, and each must take hours to construct. But the flavours are bold, the technique utterly assured.

“This kitchen’s cooking is as tight as a Nashville backing band. In a cursed site that hasn’t had a success since Prue Leith opened her eponymous place back at the fag end of the 1960s, I get the feeling that Core is here to stay… flavours dance between the subtle and the sensational… up there with the best in town. Reassuringly refined, dependably deluxe.” 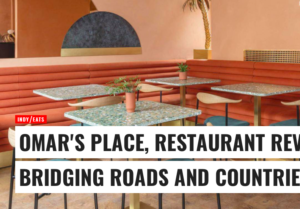 Emma Henderson in The Independent reviewed Omar’s Place – a Mediterranean-inspired tapas and wine bar, fairly new to the Pimlico area…

“The cuisine covers a huge variety of locations with – wait for it – more than 20 countries featured.

“People are starting to know [Omar] Shabaan by name …and drop in for a drink and a bite… interiors of the Grade II-listed building … a modern Moroccan feel.

“Each serving dish – which certainly cannot be called a plate – is handmade in Spain… as avant-garde in its interior as it is in its menu… at its heart… well designed and beautifully cooked food.