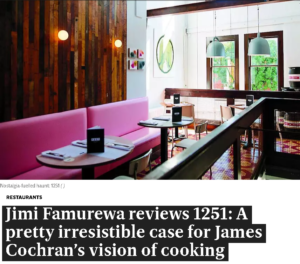 Jimi Famurewa for The Evening Standard ventured to Islington and James Cochran’s new restaurant, who has “once again plundered his Scottish and Saint Vincent heritage (plus the influence of a childhood in Whitstable)”. A “Kentish-Scots-Caribbean” blend may sound like “the stuff of a disastrous ‘fusion cuisine’”, but in Cochran’s hand ” it makes mad, brilliant sense”.

Buttermilk jerk chicken was “gorgeously craggy… patiently brined bird” with “tongue-prickling blobs” of Scotch bonnet jam, and Tamworth pork was ” a Sunday roast of the gods”. Impressively, the puddings nudged everything “up several levels” – the ‘malted HobNob’ was apparently “NSFW”, in a very good way.

1251 and James Cochran serve up “soulful, foot-on-the-amp cooking, touched by a sense of joyous, grinning nostalgia”. (7/10) 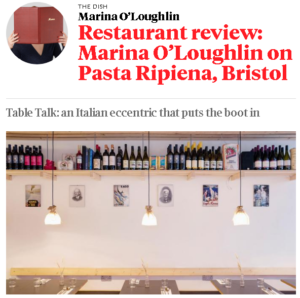 The “main event” is stuffed pasta: “edible origami”: spinach ravioli “are stuffed with parmesan-rich polenta — double-carb heaven”, while triangoli are filled with a “trawler’s worth of wild prawn, crab and mussels, all bound together with rich shellfish bisque”. It’s “messy, chaotic, sloppily delicious, with flashes of real sophistication”.

Is it really Italian? Dishes are “complex and overloaded, qualities I’d sniff at in an actual Italian restaurant”. But it’s also “a whole lot of fun: cooking designed to make you happy, not adhere to rules or stick to agendas”. 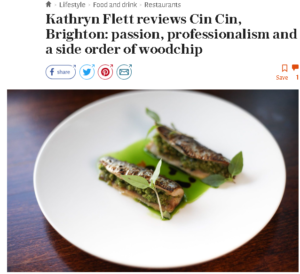 Having recently declared that “it turns out that all you have to do to eat quite fantastically well in Brighton is… go to Hove”, Kathryn Flett in The Telegraph visited Brighton’s Cin Cin – which also has a branch in Hove – and happily ate her words, along with Italian cured meats, Moretti, taleggio and “easily the best arancino I’ve had this decade”.

The Brighton “mother ship”, a former pop-up (and now ‘bibbed’ by the tyre men) may be “a no-frills converted MOT ­garage” but has “a Roux-grad head chef”, who cooks “right there next to you quietly and unfussily in a non-suffocatingly-hipster manner” and “demonstrates only passion and professionalism”; service is “impeccable” and the dining space is “cool and relaxed”. (****) 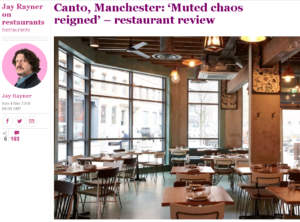 For The Observer, Jay Rayner  was in Manchester, visiting the sibling to El Gato Negro. Unfortunately, Canto was not the same slick, delicious experience. Portuguese rather than Spanish,  with “random outbreaks of fusion” in the small-plates menu.

A beautiful makeover of the industrial red-brick building aside, not much here impressed Jay. Service was unimpressive, lacking knowledge (and care), no visible management meant “muted chaos reigned” and the food was “a bizarre mess: by turns ill-managed, ill-thought-out and overpriced”. The prawn turnover was “a Findus Crispy Pancake tribute act” – although he liked the braised pig’s cheek with chestnuts: “a slab of autumn on a plate”.

There was better news at the end of the meal (but it wasn’t the bill) – a pastry-free almond torte was “a beautiful, sticky toffee-like thing”, and there’s “rather brilliant custard tarts”. 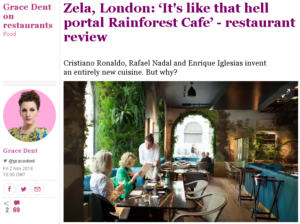 Grace Dent in The Guardian had an odd experience at the celebrity-backed Zela, newly opened in the ME hotel in Aldwych. Christiano Ronaldo, Rafael Nadal and Enrique Iglesias have chucked “so much money at a restaurant that they claim to have invented an entirely new cuisine” – ‘Meppon’ – apparently “an exquisite, original fusion of the best Mediterranean produce with Japanese techniques”.

But was it exquisite and original? Certainly not the latter, as it reminded Ms Dent of her recent meal at Tast in Manchester. Dishes like gnocchi with miso halibut, usuzukuri toro with pan con tomate and “many other raw things flecked with caviar or truffle” are challenging, poorly put together (“the standard of sushi rolling is sleeker at the Sushi Daily stand in Waitrose”) and service is either ” mob-handed” or entirely absent.

The interior leaves a lot to be desired too – lots of greenery everywhere is nice but invites an unfortunate comparison: “for all the millions spent, Zela feels exactly like the West End hell portal Rainforest Cafe”. 4/30 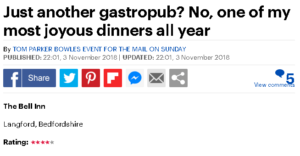 Another four-star review from Tom Parker Bowles in The Mail on Sunday, but not for just “another bloody gastropub. Rather, a restaurant to truly relish”. At The Bell Inn in Langford, Tom and his family enjoyed a “bustling Saturday night” meal, with “charming staff” . 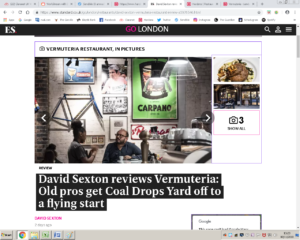 It’s a “homage to bars… in Italy, France and Spain”, with a “peculiarly pleasing, convincing atmosphere”, but the “food proved elusive”, taking several hours to arrive on his first visit. Vermuteria has a small kitchen with limited facilities, which hopefully won’t limit its potential to produce “more of the food that’s won Demetre such a following”. (3/5) 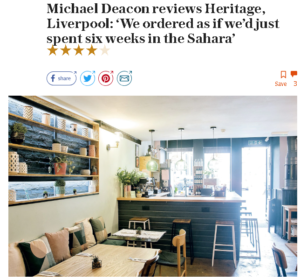 Michael Deacon in The Telegraph ate at small-plates restaurant Heritage in Liverpool, where he “ordered as if we’d just spent six weeks in the Sahara”. (****1/2) 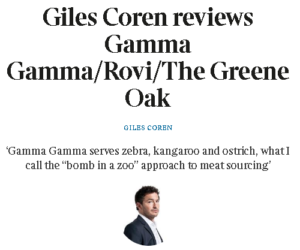 Giles Coren for Saturday’s Times magazine must have received a fair amount of grumbles about his recent reviews – either that or he felt like eating out three times this week, as he provided his readers with a trio of reviews, in order to (attempt to) satisfy everyone.

Gamma Gamma’s “menu is stone-cold mental, being a fusion of Japanese and Indian styles” (cue a series of wordplay japes from Mr Coren, describing the other global cuisines represented). But the chef can ” unquestionably cook”, serving up the unusual proteins (“zebra, ostrich and kangaroo”) with style; banana spring rolls were “sensational”. Also, the “artwork is bonkers”.

If that all sounds far too much like a “Balearic knocking shop with sweeties”, there’s always Rovi, “a proper modern restaurant for grown-ups… from the pomegranate seed king himself, Yotam Ottolenghi”. There’s no “daffy fusion here”,  just “Ottolenghian sincerity, veracity and admirable commitment to eating vegetables”, albeit with “modern tweaks – such as open-fire grilling and fermenting”, and a touch of the Orient.

Readers outside London who are after a “decent plate of proper old-fashioned grub” are directed towards a new Windsor pub, The Greene Oak – “a friendly dog-walker’s pub with good beer, perfectly decent cooking and a serious Sunday roast” – which already “has the feeling… of a format conceived to be rolled out”.

Nicholas Lander in The FT reviewed Tast, Pep Guardiola’s new restaurant in Manchester; “this latest foray reveals his love of good Catalan food and wine but the space lacks excitement “.