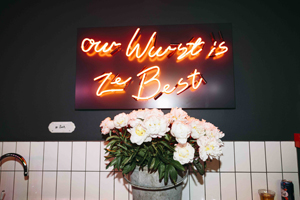 Serendipitously coinciding with Oktoberfest, the latest Herman ze German outpost opens in Fitzrovia’s Charlotte Street next week. This is the chain’s third London site. The original opened just off the Strand in 2010, followed by a second shop in Soho, in 2013.

Herman ze German serves up traditional sausages, but offers gluten and lactose-free Bratwurst, Chilli Beef and Bockwurst, topped with sauerkraut and onions. Currywurst is also on the menu, with vegan wurst set to launch later this year. German beers are available on tap or bottled.