Amanda Sharp and Matthew Slotover, the art-world power-brokers behind the Frieze global art fairs, are taking their first steps in hospitality with the opening of Toklas, a Mediterranean-style restaurant in the Strand that shares a site with their Frieze headquarters. Drinks are being served on the terrace this week to coincide with this year’s edition […]

Simpson’s-in-the-Strand – where Dickens and Shaw, Gladstone and Disraeli, Conan Doyle and PG Wodehouse all feasted – will close in April for an overhaul designed to reclaim its status as one of London’s leading restaurants. Founded in 1828 as the Grand Cigar Divan coffee house and chess club, it became famous for its lavish servings of […] 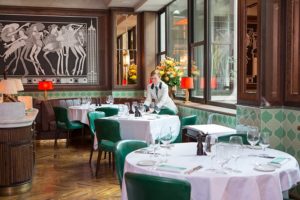 Set against a masculine backdrop of dark mahogany woods, buttery green leathers and vibrant pops of red, Smith & Wollensky is famous for its perfectly-cooked USDA Prime dry-aged steaks alongside British and Irish cuts and premium seafood. Sitting alongside are 40 classic cocktails with a twist and a 500-strong bin list of award-winning wines, 40 […]

NYC steakhouse Smith & Wollensky is to open its first non-US operation in London on 17 June. The massive – 300-cover – restaurant will occupy the grandiose, art deco Adelphi Building in John Adam Street, near Charing Cross. This makes it possibly the first major non-hotel dining room to open south of the Strand since […]

Serendipitously coinciding with Oktoberfest, the latest Herman ze German outpost opens in Fitzrovia’s Charlotte Street next week. This is the chain’s third London site. The original opened just off the Strand in 2010, followed by a second shop in Soho, in 2013. Herman ze German serves up traditional sausages, but offers gluten and lactose-free Bratwurst, Chilli […]

The Editors’ review of Pavilion It’s handy enough for a pricey shopping lunch, but not a destination restaurant.   Grace Dent is in a Viennese whirl over Fischer’s The Evening Standard critic loves Corbin & King’s new Vienna-style café.   Smith & Wollensky to open at Adelphi US steakhouse to open its first London outpost […]

NYC steakhouse Smith & Wollensky is to open its first non-US operation: in the Adelphi, just off the Strand. The massive – 300-cover – restaurant will occupy the ground floor of one of the capital’s most impressive ’30s office buildings, the upper floors of which overlook the Thames. The two level restaurant will cover 15,000 square […]