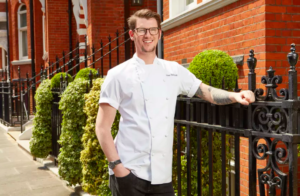 The hotel is set to open at the end of 2018 and will see Handling divide his time between the Belmond kitchen and his two Frog E1 – which has a five-star food rating  in the 2018 Harden’s Survey – and WC2 restaurants.

Handling has featured in The Caterer‘s ’30 under 30’ list and remains a chef to watch in the industry. Belmond says the Scot will bring an “energetic passion” to a menu leaning towards traditional British with a modern twist. Handling is also well-known for his emphasis on sustainability.

“Adam is an exciting and innovative talent who has made his mark on the London dining scene,” said Klaus Kabelitz, the general manager at Belmond Cadogan Hotel.

Handling will oversee all food and beverage operations at the hotel, which will include a window into the kitchen, dubbed a ‘chef’s theatre’, a bar and terrace, and a tea lounge.

“I’m so excited to be partnering with Belmond Cadogan Hotel to bring an outstanding selection of dining options for visitors and guests of the hotel,” said Handling.

“Belmond has an incredible worldwide reputation and the building itself has an amazing history – I’m really looking forward to bringing the hotel into a new, modern chapter and putting my stamp on the menus. Being part of this launch is one of the highlights of my career.”