Table for one? An embarrassing question? Eenmaal (‘one meal’) in Amsterdam – a restaurant that caters exclusively to solo diners – is trying to do away with all that. This week we grabbed a table at their pop-up in Holborn.

Just down the road from My Old Dutch (a branch of the venerable pancake chain on High Holborn), Eeanmaal may also hail from the flatlands, but this time brings with it practically no carbs, no alcohol and no dining companions.

The pop-up, created by Marina Van Goor and backed by glaceau smartwater, held just one lunchtime setting on Thursday 29 and three on Friday 30, so I grabbed one of the very limited tables. If all goes well Van Goor hopes to open permanent outposts in London and Paris.

Diners received a main meal and their choice of starter or dessert from a menu, which, like the décor, is stripped back. The interior is all white surfaces and cool blue lights, the food is Scandi-esque dishes of homemade ricotta with rye bread, caramelised whey and beetroot and cauliflower gratin with dill, pickled radish and matcha salt.

After plumping for a main and dessert instead of a starter, food envy quickly followed. The cauliflower gratin portion seemed a little meagre in comparison to the roast beef with horseradish, heritage carrots and yogurt. That’s the thing about dining alone, you can’t steal a bite of your companion’s lunch. 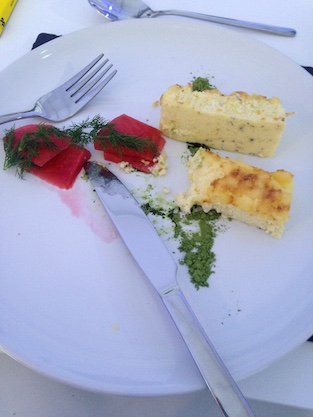 Still the cauliflower gratin was tasty, and, being a sucker for all-things pickled, the contrasting flavours of the radish and gratin really worked. In fact, it was a meal of contrasting textures and the balancing of sharp and sweet. For dessert I choose buttermilk mousse with bitter lemon and preserved pear, by far the better dish. The mousse was fantastic, wonderfully light and sharp with just the right amount of sweetness from the pear.

And if you were worried about dining alone? First of all there’s a room full of people doing the same thing so you don’t stick out like a lonely thumb. But Eenmaal makes it its mission to nurture the solo diner: reading material (in the form of life lessons from Kierkegaard) was handed out, eulogising the benefits of enjoying your own company – so not just a meal, valuable lessons in life too!

The music was not intrusive, and, like the look of Eenmaal, cooly contemporary. The overall effect of the murmuring soundtrack, lack of hubbub and white surfaces lit by blue lighting was not unlike an aquarium – that’s not a criticism, from someone who loves aquaria! Eenmaal is also a superb spot for people watching. Some of the other solo diners were buried in their books, or (perhaps feeling the awkwardness of sitting two feet from someone and not speaking to them) some were engaged in conversation with their neighbours. The majority though were glued to their mobile phones, the traditional modern companion of those finding themselves on their tod. As David Mitchell’s Peepshow character Mark so insightfully mused (when stood up for a date) – “I’ll wait a bit longer. I’ve got my phone. You’re never alone with a phone.”

Harden’s was invited by the organisers of the Eeanmaal pop-up to eat as their guest.