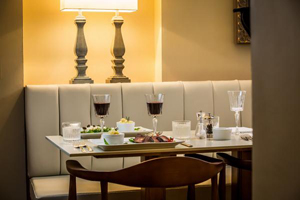 The Editors’ review of La Tagliata

We find a very modern Tuscan villa with a competently realised menu.

Zoe Williams – the loan dissenting voice on The Palomar

Only two stars in the Telegraph? Has the Israeli restaurant gone so badly downhill since our visit just two months ago? Read our review.

The White Brasserie launches The Hare at Old Redding.

The Evening Standard reviewer definitely enjoys the food, but it seems like she loves the cocktail menu more.

30% off food at Toro Gordo this month

The new Asian-influenced tapas bar is offering savings to Harden’s readers throughout August.

Fay Maschler goes all low-key on us

The Standard’s critic gives her verdict on her neighbourhood Chinese, The Bamboo Flute.

The former pop-up will celebrate the launch of its first restaurant on 21 August, tickets available.

Street Feast founder calls for 'time out' on rent and debt
Mao Chow to take over the kitchen at Mortimer House
UKHospitality and co. push government to help pay restaurant rents
Harrods is back: new Jason Atherton 'Social' and late opening in the Dining Halls
Share this article:
Facebook
Twitter
Join the Community
Join for Free