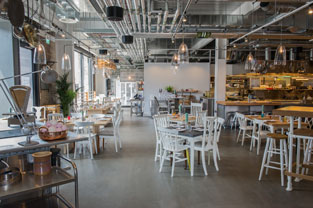 Were you aware it’s Earth Awareness month? Harden’s has teamed up with the Sustainable Restaurant Association (SRA) to bring you a list of some of the UK’s top places to eat ethically. Save the planet while also tantalising your tastebuds…

Harden’s says: “An exciting new venture for Bruno Loubet and his team”; this King’s Cross newcomer – “a fantastic warehouse space with open-plan kitchen” – promotes an “innovative” brand of vegetable-centric cuisine, which early-days reports rate as approaching the “sublime”.

The SRA says: “Since opening last year this large modern restaurant, in a new development north of Kings Cross, has created a real buzz, mostly focused on a menu which makes vegetables the star turn – in tune with diners’ desire for healthy eating options. Sustainability has been built into the design, with a computerised extraction system which switches itself off when it is not required. There are timers on all the lights which only come on a few minutes before opening. Much of the furniture is also reclaimed.” 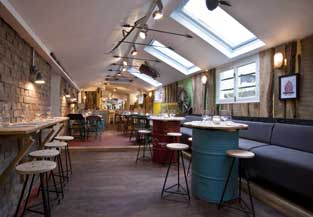 Harden’s says: “A brilliant new version of the old Ark”; this pint-sized, Notting Hill Gate landmark has been imaginatively re-born in “casual”, faux-“rustic” style – its “delicious, British tapas-style” dishes may be no bargain, but most reporters think they are “wonderful”, especially for a “cool brunch”.

The SRA says: “The Shed team, including the Gladwin brothers as chef and farmer, have put together a fantastic daily-changing menu of Sussex produce sourced from a family farm and other local suppliers. All the meat is free range and any fruit and veg not sourced locally is Fairtrade. And it’s not just the food: the house wine and cider is sourced from the family vineyard and orchard.”

Harden’s says: “Tiny but full of enthusiasm” – this “lovely” spot “in a quaint village” uses “only sustainable and organic ingredients” to “excellent” effect; its offshoot Café Ode, with sea-view, also gets the thumbs up.

The SRA says: “A sustainable philosophy runs throughout cafe-ODE, from the materials used to build and renovate the stable buildings to the solar water-heater located on the sedum kitchen roof and to the many pieces of recycled kitchen equipment they use to produce wonderful food, sourced from the region.”

“Iglu is enough to give ‘ethical eateries’ a good name!”; this largely organic New Town spot offers a “simple menu” which pleases most, if not quite all, who report on it.

The SRA says: “Iglu’s fish policy is to use organically or ethically farmed fish, such as sea trout and salmon, which has a lesser impact on the environment and wild stocks. The wild caught fish are from local waters which at present have healthy stock numbers. They do not use any dredged shell fish, mussels are rope grown and crabs are pot caught.”

Harden’s says: “Gallic charm and no pretensions” mean that this “crisp” and “oh-so-French” bistro “hidden away down a side street” in New Town “never fails to delight”, not least with its “classic” cooking.”

The SRA says: “Chef director, Neil Forbes, and his kitchen team pride themselves on producing everything in-house, using ingredients sourced from local producers and suppliers, thus supporting the local economy and reducing food miles in line with their slow food philosophy – unsurprisingly as Neil is an ambassador for Slow Food. He also runs an allotment at the local university to provide produce for the restaurant and to teach students about horticulture and food production.” 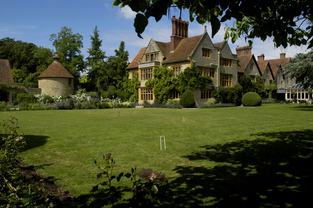 Harden’s says: “Absolutely perfect, not cheap but worth it” – the cost issue may be ever-present, but Raymond Blanc’s “fabulous” manor house hotel and restaurant remains THE destination for those in search of a “fantastic all-round experience”; make sure you leave time for “wandering round the garden”.

The SRA says: “Raymond Blanc has looked after this 15th century manor house for over 25 years and is passionate about achieving perfection. A third of the produce used in the kitchen is grown in the gardens and chefs use only free range, organic meat and eggs from suppliers Le Manoir has been working with since the restaurant opened.”

Harden’s says: “It’s not just the “lovely” location in a monastic courtyard that makes this city-centre operation of interest – it’s also tipped for some “superb” cooking, including “really excellent fish”.

The SRA says: “Set in a horseshoe of buildings that shelter a medieval courtyard, Blackfriars is the oldest dining room in the UK. The restaurant is dedicated to sourcing seasonal produce and high welfare meat from local farms and markets, to produce award-winning traditional British menus. And it can all be washed down with a wide selection of British wine, beer and cider .”

Harden’s says: “What a fantastic setting!” – in a “stately” country house hotel, this “romantic” dining room with “Gothic overtones” offers “exquisite food” and a “seductive” wine list, and wins recommendations from all who comment on it.

The SRA says: “Local produce dominates the menu at Samuel’s. All game is sourced from the estate (venison, grouse, partridge, pheasant, mallard, pigeon) and the walled garden produces flowers for the hotel from January through to November. Sixty varieties of fruit and vegetables are grown on the estate and seasonal foraging also provides additional produce.” 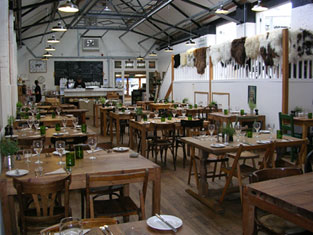 Harden’s says: “The most popular of Hugh Fearnley-Whittingstall’s outposts, this “lovely” informal restaurant (behind a deli) inspires consistent praise with food that’s “very fresh, local and wholesome”; beware, though – daytimes can be a bit of a “pushchair paradise”.

The SRA says: “River Cottage Canteens showcase the very best in seasonal, local, organic and wild food. The majority of the produce is sourced within a fifty mile radius of each premises, with fish supplies coming from the South West coastline.”

Harden’s says: “Value is unbeatable” at this central, “not for profit” café, which serves “simple”, “healthy and organic” scoff from a short daily changing menu in a “laid back” fashion, to “students making use of the free wifi”; arrive early – “dishes run out later on”.

The SRA says: “Turl Street Kitchen sources from great local produce and independent drinks makers. Their ethically sourced offering changes not just with the seasons, but each and every day, with enough options to make a choice and few enough to keep down waste. Huge reclaimed tables and comfy sofas match a menu designed for sharing.”

Harden’s says: “A beautiful view of Christchurch harbour” is just one of the attractions of this glam and “very enjoyable” waterside spot, where Alex Aitken “maintains excellent culinary standards”, and which “always offers a good choice of fish fresh from the catch”.