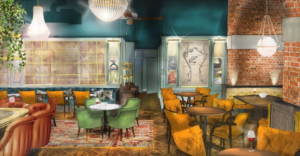 This is a guest blog by our friends at the Sustainable Restaurant Association, who launch a new campaign in August to get restaurants serving more veg and better meat. Mushroom risotto, butternut squash tart and pasta with tomato sauce. Three dishes stuffed away in the corner of the menu miles away from the long, eye-catching […]

Bruno Loubet’s veggie-centric King’s Cross venture, Grain Store, will close its doors for good on 23 August. The warehouse-style space was one of the first restaurants to lead the regeneration of Granary Square when it opened four years ago. Once a rather barren landscape behind King’s Cross station, the locale has been transformed by the […]

â¦¿ September 27 will see the opening of Phil Howard’s new venture, Elystan Street, in the backstreets of Chelsea. The site will be remembered by some as Tom Aikens – another chef who had a Michelin 2-star pedigree and struck out on his own in this quiet backwater, a short stroll from The Conran Shop […]

There’s something about summer drinks that really lends itself to the art of mixology. These balmy evenings and sunny afternoons are just so much more civilised with a classic cocktail in hand. Of course for the more adventurous among us there are plenty of creative concoctions out there too (pig’s blood vodka Bloody Mary anyone?). Whether […]

Westminster institution, Shepherd’s, a favourite haunt of politicos, lobbyists and journalists has returned to London’s dining scene after two years. When the restaurant closed in 2013 it was dubbed “the end of an era” by The Spectator and certainly that part of town remains curiously bereft of mid-priced alternatives. So news that Shepherd’s has reopened (under […]

Sacre bleu! It’s been announced that an American chef is to head up one of London’s more popular Gallic bistros. David Fogelman has taken the reins at Bruno’s Loubet’s eponymous establishment at the Zetter Townhouse hotel in Clerkenwell. Fogelman, however, has been semi-nautralised, having worked in London kitchens since 2009, cutting his teeth at restaurants like Gordon Ramsay at Claridge’s and Fergus Henderson’s […]

What better way to while away the long summer nights, or the (hopefully) scorching summer days, than by enjoying a meal outside? Now that the fine weather is here and holidays are imminent, there’s plenty of opportunity for dining al fresco in London. We’ve rounded up the best gastropub gardens, riverside patios and rooftop terraces […]

Were you aware it’s Earth Awareness month? Harden’s has teamed up with the Sustainable Restaurant Association (SRA) to bring you a list of some of the UK’s top places to eat ethically. Save the planet while also tantalising your tastebuds…   Grain Store N1 £50 Harden’s says: “An exciting new venture for Bruno Loubet and his […]