This week sees three near-identical reviews of Brat from Tom Parker Bowles, Keith Miller and Fay Maschler (despite Fay saying last week she’d wait until a restaurant settled in to visit!), not including Grace Dent, who appeared to go with TPB… 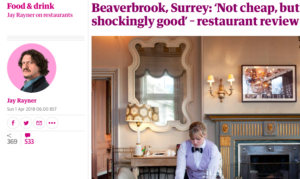 “First impressions are brutal… the house has been restored carefully… deep of cushion and gilded in all the right places.

“…they have gone for a Japanese “grill”. It is more than a little incongruous.

“Japanese “tacos”…We’re not sure whether to eat them or enter them for the Royal Academy’s Summer Exhibition.

“Beaverbrook sushi is not cheap, but it is shockingly good. Two words never to get excited by are “cheap” and “sushi”. They’re like “amateur” and “brain surgeon”. Or “Michael” and “Gove”. All are terrible ideas.

“Revel… in the crisply pressed sense of place; in extraordinary country house glamour, and a moment of countryside peacefulness.” 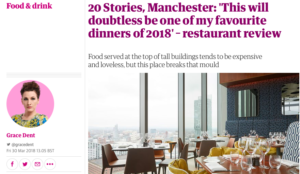 “Most food served at the top of very tall things transpires to be expensive and loveless.

“Byrne’s cooking treads a fine line between hearty and dainty.

“… you could still spend £200 with wine here and leave hungry.

“… service was so lovely, prompt and non-intrusive, and the dishes so relentlessly excellent, that it’s hard to quibble.

“… it’s hard not to be won over by thoughtful plates of non-cynical loveliness… one of my favourite dinners of 2018. 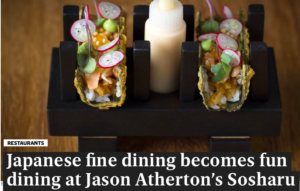 “[Jason Atherton] and executive chef Alex Craciun have shaken things up and overhauled its menu, with the main effect of making it cheaper.

“The best thing about the the new-look restaurant… is that it seems to have gained a more buzzy atmosphere. 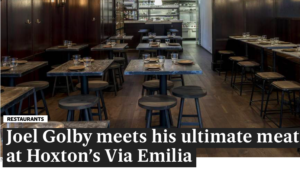 Vice writer Joel Golby is the latest journo to take a crack at writing reviews for the Standard. Find out what he thought about Hackney’s Via Emilia…

“This is a concept that is bulletproof.

“… pillows of gnocco fritto — the restaurants’ version of a starter carb, which taste-wise lands somewhere between bread and a fairground doughnut… ‘bolognese… was how it should be: eggy, eggy tagliatelle shot through with salty, meaty sauce.

“… enjoy this meal with Lambrusco, the region’s iconic sparkling red. Via Emilia isn’t a place for a private meal… but the food makes you want to give up on British life and move immediately to northern Italy.” 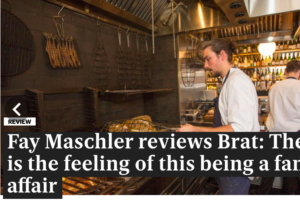 “Contentment flows unimpeded through the space.

“…at night the place gleams in a particularly enticing way.

“Provenance is not all because knowledge and imagination are also involved. Bonfire night potatoes cooked in the ashes are [an] important side dish. Nothing on the menu that I try jars.” 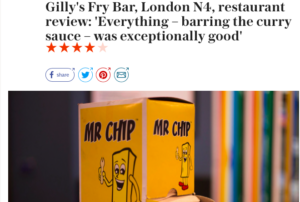 “…an odd place, somehow austere and whimsical at the same time: a paean to nostalgia that is also obscurely futuristic… we are the first national to pay them a visit.

“The “salt and vinegar martini” … isn’t just a martini: it’s a martini and a half, a queenly, dreamy, sweet-sixteeny martini.

“Everything was exceptionally good. Gill is a Zen master of the arts of patience, precision and restraint… we loved our dinner – even the ultra-ironic deep-fried Celebrations and mini-doughnuts with which we rounded it off.” 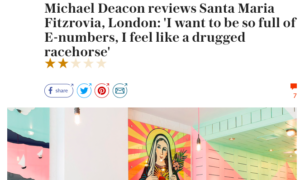 “I want to be so full of E-numbers, I feel like a drugged racehorse.” 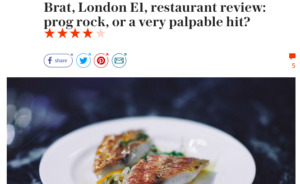 “The space is dominated by a big wood grill festooned with scary little iron cages… making a thing of hefty, spendy, shareable grilled meat and fish dishes… many Basque touches on the menu.

“The wine list has been devised in collaboration with Noble Rot …and is almost pathologically interesting… the merest suspicion of Prog Rock Cooking” [cooking to impress other chefs and foodie influencers rather than your own customers]. Parry’s heart is true… he’s doing it for the kids.” 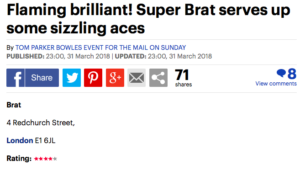 And Tom Parker Bowles in The Daily Mail is the third critic to pay a visit to Brat this week, and guess what? He loves it too…

“Grace, my friend and fellow restaurant critic, said she once worked here.

“… tables crammed in hugger-mugger, the lighting dim and warm, with an open bar for walk-ins. Service is smiling and switched on, the chefs working with methodical intensity… the constant sizzle of fat on glowing ember gets the taste buds suitably priapic.

“Even the side orders impress… when cooking over flame, there’s always the danger of overdoing things… But Parry is a master… grilled Galician steak was sublime.

“… the sort of atmosphere you want to gulp down in deep drafts. Parry has done it again. This Brat burns hot.” 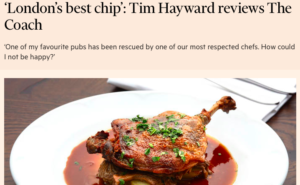 “One of my favourite pubs has been rescued by one of our most respected chefs. How could I not be happy?”