Mark Jarvis – chef-patron of Anglo in Farringdon “light years ahead of some famous names in terms of quality” – today (1 May) launched a new venture in Mayfair. Stem in Princes Street, just off Regent Street, occupies a property owned by The Crown Estate and is part of a significant regeneration project to increase both restaurant and retail presence in the area. 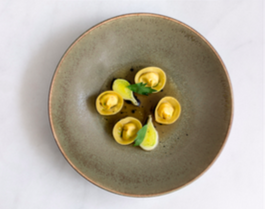 An international wine list of approximately 120 bins will be overseen by the company’s operations manager Jon Cannon.

Stem has 35-covers and features a verdant living wall. The lower ground level will have a six-seater private chef’s table as well as darker tiling and granite table tops throughout. Stem is the third London venture from Jarvis, who also opened Neo Bistro near Oxford Street last summer.