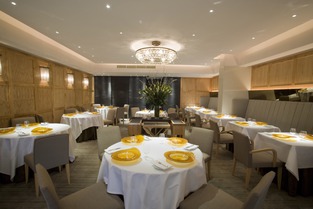 The collaboration is of particular interest as Alleno’s credentials include an impressive 10 year stint as head chef at Parisian palace hotel Le Meurice. Since 2008, however, his main goal seems to have been to become an international brand, and turn his success as a chef into an Alain Ducasse-style global empire.

The Alleno Group now has 15 restaurants in hotels in France, Morocco, Dubai, Taiwan and China. Latest to launch was Restaurant 1947 in Courchevel, which opened in autumn last year.

Bosi and Alleno will each prepare half the dishes on the tasting menu, served at Hibiscus on25 and 26 April 2014. Dinner is £175 per person and there will be an option to select matching wines at an additional £75 per person.