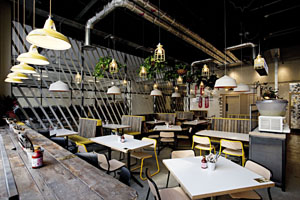 From the team behind Wahaca, the bright and buzzy Mexican street food chain, comes an all new venture to Brick Lane’s Old Truman Brewery. Well, we say all new, the concept is still very much centred on Mexican food, but with a (now commonplace) American twist.

The US influences at DF/Mexico, which opened on 24 July, come in the form of toasted brioche buns housing usual Mexican torta fillings (like pork pilbil, chile beef and ancho mushroom) ‘burger-style’, topped with smashed avocado and cucumber pickle. DIY Mexican boards with four-hour carne con chile or steak and cheese ‘Alambres’ are offered alongside burritos, salads, tacos and nachos. There is also a selection of locally sourced beers and soft drinks.

The idea for DF/Mexico was apparently conceived on a central and North American road trip taken by Wahaca founders Thomasina Miers and Mark Selby, on which the pair met chefs and restaurateurs, and sampled Mexican flavours from New York and Chicago to Mexico City.