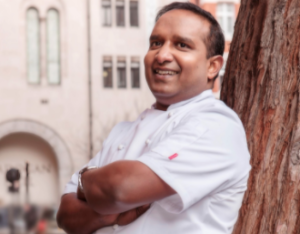 After 10 years heading up the kitchen at Mayfair’s “exceptional” modern Indian, Tamarind, Peter Joseph has left to start his own restaurant. His first solo project, Kahani, launches in Chelsea this summer on the former site of Canvas – a restaurant once described by our reporters as having “no redeeming features”. So a definite improvement for the Sloane Square area.

After well over a decade spent creating dishes inspired by the Moghul fare of North-West India at Tamarind, Peter will open this progressive Indian restaurant using seasonal British ingredients with an interior inspired by Hindu storytelling and philosophy. Located opposite Cadogan Hall, Kahani translates to ‘story’ in Urdu.

Chef-patron Peter was inspired by his own upbringing in Tamil Nadu, the southernmost state of India, where eating is a community’s means to celebrate, bringing people together, breaking boundaries and sharing stories, often from a Kavaads, a handcrafted storyteller’s box . At Kahani this will be done through a social eating concept with diners encouraged to forgo the formalities of fine dining and use their fingers to eat with for the first courses.

Peter has taken an inventive and modern approach to dining, with a menu that relies heavily on lighter grilled proteins and vegetables from the central robata grill and only features two curries. Seasonality and sustainability are at the core of his dining philosophy with the freshest ingredients sourced from local, independent producers, with specialities such as organic herb-fed chicken and an excellent range of vegan dishes.

Small dishes will include fusion plates such as: Golden Beets Tiki, Masala Grilled Avocado and Tandoori Calamari. Moving on to skewers from the grill, guests can choose from imaginative combinations such as Blue Crab, Wild Venison Boti, Rabbit Kebabs and Lemony Langoustines. Desserts will abandon tradition and include a ‘Chilli Chocolate Mousse Bomb’, as well as Peter’s ‘melt-in-the-middle’ cheesecakes, a novel fondant variation of the dessert with flavours such as Raspberry, Rose and Pistachio and Mango, Passion Fruit and Blueberry.

Eat Out to Help Out begins on August 3 - there are deals to behold
Hackney restaurateurs prepare for Fulham opening
BOXPARK to launch new concept site in Bristol
Corbin & King lose battle for control of their group
Share this article:
Facebook
Twitter
Join the Community
Join for Free