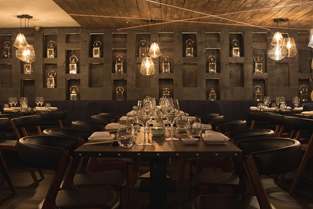 Scott Hallsworth has been a busy boy – not only has he opened two branches of izakaya-style restaurant, Kurobuta in the last year, he’s also just launched Joe’s Oriental Diner in Chelsea. His partnership with nightclub supremos Piers Adam and David Phelps (of Mayfair’s Mahiki) didn’t last long though with the ex Nobu chef quitting their joint members’ club venture Ramusake just a few months after it opened.

Hallsworth plans to concentrate on his restaurants, which is fair enough as his empire is growing apace with Kurochan opening at the Mandarin Oriental in Bodrum later this year.

Ramusake in South Ken, designed by W Design Studios, occupies the former site of The Brompton Club and still looks tremendously club-like with its dark wood and low lighting. The bar and restaurant serves Japanese cuisine and cocktails. The menu was devised by Hallsworth with signature dishes like: Tuna sashimi pizza with wasabi tobiko and truffle ponzu and fried chicken kara-age sliders with kimchee mayo, pickles and iceberg.

And the cost of access to this Japanese-inspired luxury? £250 per year.

Dinerama in Shoreditch has closed for good
New Dulwich Indian opens as a takeaway ahead of post-lockdown launch
Mowgli to open restaurant in Cheltenham - its 12th site
400 Rabbits announces flagship site in Elephant & Castle development
Share this article:
Facebook
Twitter
Join the Community
Join for Free