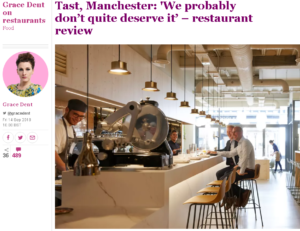 Grace Dent in The Guardian visited Hot Manchester Newcomer Tast Cuina Catalana, one of the ” delicate, thoughtful, educational places” that is aiming to bring a true taste of Spain to Britain. It’s “forward-reaching”, “high-end, imaginative, occasionally edgy” – and huge: there’s three “capacious” floors to fill, each offering a different level of formality and adventurousness. Will it work?

One way to get the punters in, is, of course, Instagram bait. Here, in the ‘pinya’ (small bites) level on the ground floor, they are serving ‘Duck’in Donut’, “a small doughnut filled with foie gras mousse, dipped lightly in white chocolate and dusted with vivid powdered raspberry. It costs £3.80 and tastes like a satanic Quality Street”.

Red pepper croquetas from the same menu are “fantastic: fluffy, crunchy and with heavenly, sweet innards… a true work of art”. But not all of the dishes work – after almost an hour of eating, Tast feels “dainty and somewhat muted”. Redemption comes with the desserts; “where glory lies”, mostly in custard-and-pastry form.

Grace’s summary of Tast is that it’s “important, uncompromising, at times lost in translation and possibly not all that much fun”. (22/30) 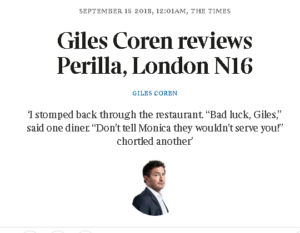 Giles Coren for Saturday’s Times magazine spends at least half of his review bemoaning an experience in Île de Ré, where he turned up too late to get a table, and his celebrity status failed to help him – but all the (English, Times reading) customers knew who he was and chortled merrily at his distress.

Back home, licking his wounds, he ventured to “unexpectedly fashionable” Stoke Newington and Perilla, and was delighted to find that it was “close to home, elegant, casual and beyond excellent”. The first two courses on the tasting menu “fair blew me away” with their beauty, soul and vision: ‘Yesterday’s bread soaked in moules marinière’ tasted “like the perfect last bite of all shellfish suppers”.

“It sounds simple, almost dull, but it so, so wasn’t” – service has a “saucy twinkle” and the whole experience was “knowingly, almost comically instagrammable”. In fact, he hails it as “right up there” with the “burning stars in the new London restaurant firmament”. (26/30) 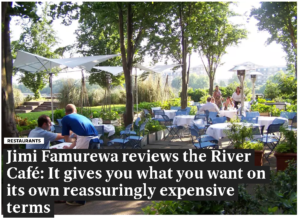 Jimi Famurewa, now established in “the coveted role of ES restaurant critic” visited The River Cafe in order to establish “a bedrock for my future forays into London’s freshest culinary ventures”.

Famous for over thirty years now, since its origins as a staff canteen, The River Cafe was filled on his visit with folk “for whom a lavish, Britpop-era lunch was still a viable reality”. There remains “more than a hint of Nineties boom to the insane prices, with mains mostly clocking in above £40”.

But “a fair bit of scepticism dissolved” during a shared starter, and evaporated with half-portions of pasta, mains and dessert : “some bucket-list places truly live up to the hype”. “Here is a place that can still teach you things about simplicity, care and beautiful ingredients singing in perfect, full-throated harmony”. (8/10) 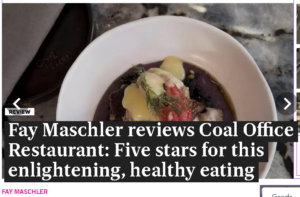 Despite being unable to find the place (“signposting in the area is crap or, to be more precise non-existent”), Fay was delighted from the start by friendly front-of-house staff: “an atmosphere of camaraderie among chefs, waiting staff and customers that is tangible yet seemingly unforced”.

Why five stars? Because two visits “delivered what can be only be described as the untrammelled joy of enlightening, healthy eating out not undermined by a depressing bill”. (*****) 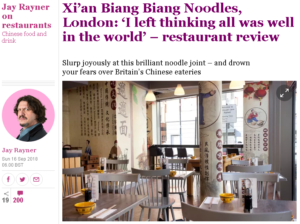 In The Guardian, Jay Rayner investigates the “extravagantly named” Xi’an Biang Biang Noodles in Spitalfields, part of the “glorious flowering in the variety of Chinese food available in Britain’s cities” as a result of the opening up of China.

This spot serves the noodle-based cuisine of northwestern China, apart from a few Cantonese dishes that are an “Essex tan shade of orange… specifically targeted at people who don’t really want to be here”. But for those who do – including our esteemed critic – the dishes are “a brilliant slap around the chops” with chilli and fire and heat. “It’s a nine-napkin job.”

This “noisy, fighty food” is served in a “big, brightly lit canteen” that’s perfect for crowds or solo diners like him (“I always think better of restaurants where people feel comfortable eating alone.”). Cold dishes are an “alarm clock for the tongue”, to be followed by “absurdly satisfying” noodles and “luscious and compelling” hot dishes including a chicken broth that’s “your mum’s hug in a bowl”.

Xi’an Biang Biang is “a utilitarian, great value enterprise posited on high-volume trade” with “uncompromising punch” in the cooking. Jay had been asked to consult on the future of Chinese restaurants in London, and was reassured by his visit here.

For Jay’s views on the future of all restaurants, via our future food security, his OFM article on Food & Brexit is an eye-opening read. 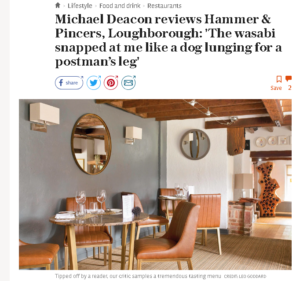 Micheal Deacon in The Telegraph recommends a visit to Loughborough pub The Hammer & Pincers for the grazing menu – itself recommended to him by a reader . Many more hits than misses, especially the pig’s cheek croquette (“beautiful”) and with “no fewer than three puddings”, including a peanut butter cheesecake that was a “total joy”.  (****1/2) 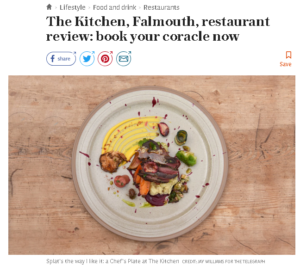 Keith Miller in The Telegraph visited The Kitchen in an area of Falmouth “that’s visibly blistering in the white heat of culture-led regeneration”. His lunch, from a “maddeningly vague”, “veg-led” menu, “trod a tightrope between messy youthful exuberance and grown-up bourgeois- bohemianism”.

He’d heard that The Kitchen was “a tiny, quirky, shabby-chic, low-waste, no-menu, ­ultra-locavore”, and nothing about his experience suggests that it was bad (in fact many elements were “superb”), although he was decidedly snarky about the decor, the presentation and the menu. Maybe taking a teenager along (his 13-year-old daughter) wasn’t the best idea… (****) 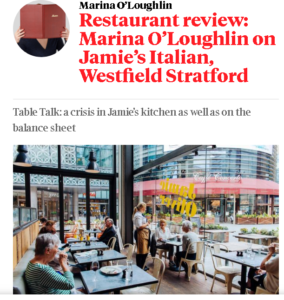 Marina O’Loughlin’s Sunday Times review of Jamie’s Italian at Westfield Stratford starts off badly, with her wanting to “swear and kick something” just looking at the menu, with its “ham-fisted translation… solecisms — pesto made with almonds? “Italian nachos”?  … and a rash of adjectives”.

She’d “liked the chain when it first launched, fresh and feisty, like its owner”. But a Twitterstorm of violent reaction from her followers when she reported of Oliver’s ‘heroic’ rescue of the failing chain sent her in investigative mode to the branch in east London. “Kettled by our lugubrious server into the only bit that’s occupied”, she noted vast empty spaces beyond and upstairs.

Starters were “not bad” and “fine”, but mains were “appalling” – even a special (she just has to try ‘Nonna Marina’s Salina chicken’) was “dismal”. Customers  are “led to expect more from Jamie’s name” than lovely loos and an “expensive fit-out”: “I am, of course, being paid to eat here. You’d have to pay me quite a lot to come back.”

You have to ask yourself what took her so long. Harden’s has awarding this chain dire marks for the last five years. 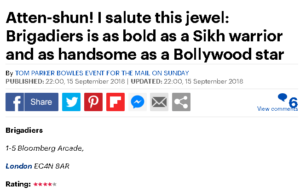 Tom Parker Bowles in The Daily Mail had nothing but praise for Brigadiers. The decor is “exquisitely and expensively wrought, an Indian Art Deco delight of polished marble, lacquered wood and unashamed opulence” and the food has “true culinary integrity but a sly sense of fun” – not surprising for JKS Restaurants, who “create restaurants that never cease to delight”.

Starters (“the quintessence of the Friday night curry made posh”) and mains, fresh from teh fire, are “beautifully blackened “. “Forget pink gin and punkah wallahs – this place is modern to its core… What could have been a braying, overblown City booze hole turns out to be yet another jewel in the JKS crown.” (****)

The Evening Standard reported on our London Restaurant Awards, which were attended several reporters, including Fay Maschler who accompanied her sister, Beth Coventry, whose Wells Tavern was nominated for Best Pub or Bar.