Both Grace Dent and the Standard’s guest reviewer Labour MP Jess Phillips ate at Bryn Williams – both mention the appalling signage: GD “there are no signs for Bryn Williams during the half-mile walk from The Strand to your dinner table in the south wing”. JP “Somerset House is massive, has four or five eateries and rubbish signage”. 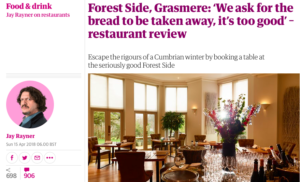 “Kevin Tickle’s cooking at Forest Side… is an expression of the Cumbrian landscape. I haven’t got as many years left as I’ve had, and I worry about losing them to seven-course tasting menus.

“… canapés… dainty things in polished hobnail boots… chive-flavoured butter… warm, open-crumbed seeded sourdough. Eventually we have to ask for the bread to be taken away. It is just too good.

“…precise, finely calibrated stuff. It stops you, makes you pause and stare for a moment.

“… the intellectual, precise approach obvious in the savoury courses doesn’t fully transfer to the sweet end of the meal. Tinker Bell delicate, a whiff of sugar rather than a full dive into the cookie jar.

“… an exceptionally good hotel restaurant. That evening I present the Cumbria Life food and drink awards at Kendal College…. Kevin Tickle is named chef of the year. Quite right, too.” 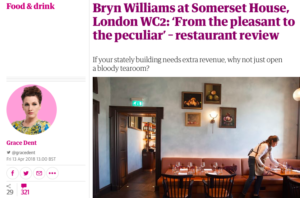 “As I left Bryn Williams at Somerset House… I decided: I am no longer eating dinner in wings of historical buildings. I’m through. If your stately building needs extra revenue, just open a bloody tearoom.

“…the menu is veg-centric, making plant-based things ‘the star of the show’. I admire the veg-championing spirit.

“The room… feels a bit like sitting for a Holbein painting… food ranges from pleasant to peculiar.

“I manage almost none of the tough roast cauliflower… because, even for a vegan-food cheerleader … the dish is a mess.

“We left as soon as possible, largely to escape the piped jazz muzak.” 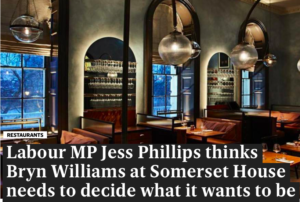 “…being left standing in a sort of limbo area feeling spare wasn’t the best.

“Bryn Williams needs to decide what it is — the food is presented as it would be in a Michelin-starred restaurant and the Somerset House surroundings are very grand.

“…frankly I’m more likely to go back for a brilliant bowl of pasta.” 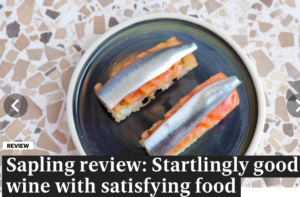 “…an incredibly soigné “wine-focused restaurant and larder”, in premises that were once a garage.

“…lovingly created to be its own … a place to drink vividly good wine with thoroughly satisfying food… appealing little dishes from the kitchen run by John Beeharry, formerly at Bistrotheque.

“The interior design… couldn’t be prettier. Dan Whine (yep) who is… just infectiously enthusiastic about all the wines… the emphasis is on organic, biodynamic, natural and minimal intervention wines… every one I tasted was startlingly good.

“The food supports the wines generously, not over-ambitious, not over-stated… here’s a brilliantly conceived, devotedly delivered, mini-palais of taste and pleasure that would grace any quarter, bang on Kingsland Waste.” 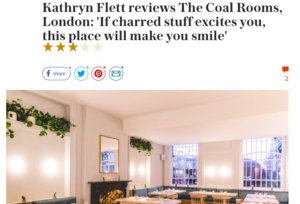 Kathryn Flett in The Telegraph reviewed Coal Rooms: “If charred stuff excites you, this place will make you smile”. 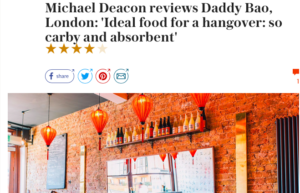 Michael Deacon in The Telegraph gives four stars to Tooting’s new Daddy Bao: “Talk about fast food. We were in and out of Daddy Bao inside an hour – having eaten pretty much everything on the menu. Ideal food for a hangover: so carby and absorbent.” 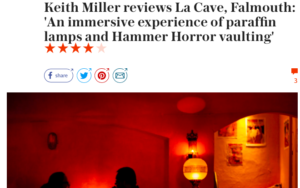 “…the retro romantic strikes back. Though new, or newish… La Cave is a full-blown specimen of the Retro-Romantic French Bistro.

“…the traditions being honoured aren’t maybe those of Escoffier and Brillat-Savarin so much as those of Sixties and Seventies Britain.

“…almost sitcom-worthy form of duck à l’orange. Puddings were slight simplifications or distillations of retro archtypes…cooked with precision, confidence and minimal fuss; and served with warmth and charm.” 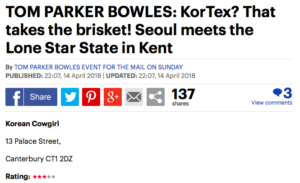 “…actually a ‘smokehouse with a difference’, sitting in the shadow of Canterbury Cathedral. Korean fried chicken and Texas barbecue… as culinary bedfellows go, they’re not entirely incongruous”

“…the room certainly embraces this cross-cultural melée, with a cheerful, clichéd charm.

“In the wrong hands, the whole place could be as cloying as supermarket barbecue sauce…the menu bangs on, like a pervy, drunken uncle, about ‘The Cowgirl’s Baps’… this is no cynical chain, rather a small, independent restaurant with genuine soul.

“…half-decent pulled pork … a whiff of real smoke and a luscious, fatty softness… beans with burnt ends … are as Texan as a cowboy’s swagger.

“Brisket is way above average. Korean fried chicken, though, is merely average… we couldn’t help falling for Korean Cowgirl.” 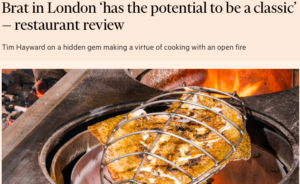 “The smoked cod’s roe starter was whipped up light and piped in thick cylinders along fingers of toast. This is one of the hidden delights of the Brat menu.

“If you ever need to lose hours of your life, dive down the rabbit-hole of toast-fancying on the internet, where people with time on their hands obsess about toast in its infinite variety.

“These zealous loons agree on little save that toast made in front of a real fire is the real deal. It is this magical product, a scorched shell encasing steamed crumb and redolent of the smoky hearth, on which the primped pink roe reclines like a sated odalisque on a fauteuil. No . . . seriously — this is some bomb-ass eggs on toast.”