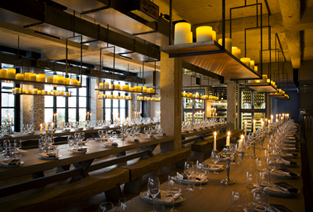 The Goodman group recently received much press about its latest prix fixe restaurant Beast (pictured) – a decadent affair charging £75 a head for king crab and steak – a concept you probably won’t find outside of London. Their lower profile, but no less successful brand, Burger & Lobster on the other hand seems tailor-made for expansion, serving its eponymous grub at £20 a pop.

So news that the group is eyeing a site in Manchester, following in the footsteps of Hawksmoor and Ibérica, comes as no great surprise. The chain has submitted plans to open in Manchester’s King Street in the Grade II-listed Ship Canal House.

Burger & Lobster, which already has six sites across London, will also open an outlet in New York this month.

Nathan Outlaw's Siren at the Goring will not reopen after lockdown – nor will Aggi Sverrisson's Text...
Restaurant industry proclaims Eat Out to Help Out an early success
Emilia founders talk of its permanent closure
West African restaurant Akoko to launch in Fitzrovia
Share this article:
Facebook
Twitter
Join the Community
Join for Free