Our unique event, exclusive to Harden’s readers, hosted at the restaurant nominated in this year’s survey as the pinnacle of London gastronomy: Le Gavroche has sold out within hours. Commiserations to those of you who didn’t nab a ticket but we are planning to host other events later in the year – watch this space!

The evening at Le Gavroche will celebrate our 25th anniversary as London’s foremost restaurant guide. As 2016 also marks Chef Michel Roux Jr’s quarter century at the helm of one of London’s most distinguished restaurants, the teams behind Harden’s and Le Gavroche have collaborated on an evening celebrating two of the leading forces in London’s restaurant scene.

For one night only, Peter Harden and Michel Roux Jr host an evening at Le Gavroche, designed especially for our readers: 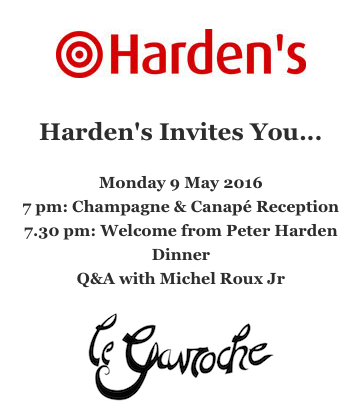 In 1991, Michel Roux Jr took his place as Chef Patron of Le Gavroche, following in the footsteps of his father, Chef Albert Roux OBE. Over the past 25 years, Michel has navigated the team and the restaurant through the constantly evolving London dining scene, ensuring the Le Gavroche menus meet contemporary palates whilst staying true to its roots in classic French cuisine and maintaining the character of the restaurant that is loved by so many.

“I’m delighted to be welcoming Harden’s guests to Le Gavroche for the evening. Harden’s is as much of a culinary institution as Le Gavroche, so it’s an honour for me to celebrate my 25th anniversary alongside them. I very much look forward to seeing you all there!” – Michel Roux Jr.

The evening’s £180 menu includes a champagne reception with canapés, four courses, including matched wines, coffees and petit fours. Guests will round off the evening with a dram of 25-year-old Balvenie whisky. Taken from one single cask at The Balvenie distillery, no more than 250 bottles will ever be the same. The single cask has been selected by The Balvenie Malt Master, David Stewart MBE, who with 54 years services at the distillery is the longest serving whisky maker in Scotland.

Michel and Balvenie recently collaborated on The Craftsmen’s Dinner, a series of films that take an in depth look at some of Britain’s leading culinary craftspeople. Watch the films here.

Corbin & King say their latest restaurant, Manzi's, will open at the end of May
Hospitality sector provides 20,000 beds to frontline workers in coronavirus fight
M Restaurants to host special dinner for NHS workers
The Harts Group to begin opening from July 4 - and Barrafina will take bookings
Share this article:
Facebook
Twitter
Join the Community
Join for Free