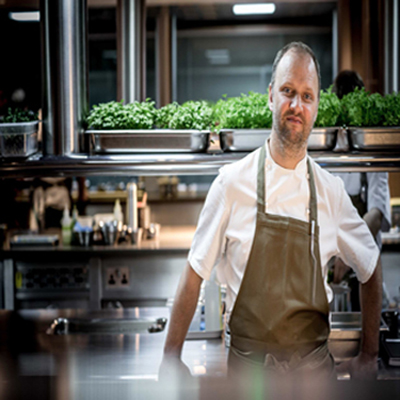 Why? First, we need to set the background. Let’s start by going back in a time machine to an era when this would have been a ‘proper’ dining room (as Lord Grantham might have recognised such a place).

How far would you need to go back? Half a century? No! If you’d visited in 2000, you’d still have found a dining room with staff flapping around in Victorian-style livery. There was presumably a chef on the other side of the green baize door, but no one knew his name. This unchanging impression fairly reflected a London restaurant scene that had been advancing only fitfully for most of the 20th century.

By the late-’90s, though, change was in the air, and Claridge’s decided a shake-up was in order. How? Easy! Employ the unchallenged – there wasn’t, to be honest, much competition – London chef who’d made himself a household name with his copious televised profanities (ably supported by regular nominations as top chef by, er, Harden’s).

Let’s not talk about the actual standards achieved in the Ramsay era (tis better not), but let’s note the fact that there was now a Big Name over the restaurant’s door. This nicely summarises London in the noughties – the era of Gordon and Jamie, where all that mattered to many restaurant-goers was going to a place associated with ‘that man off the telly’.

But this was a bad joke that couldn’t go on for ever. In early-2013 it was duly announced that the curtain was finally to be brought down on what had by then become one of the longest-running farces in the West End.

And this is where it gets really interesting. Everyone was expecting an early announcement of the successor, and quite probably a big and glitzy international name to put his own stellar name in big letters over the celebrated dining room door. But it took some eight months before Claridge’s finally announced that the successor would be… Simon Rogan.

We exaggerate, of course – everyone in the foodie world knew of the L’Enclume (Cartmel) chef, and a very nice man he is. But the key point is that he was not a ‘name’. Claridge’s change of emphasis confirms that the world has moved on. 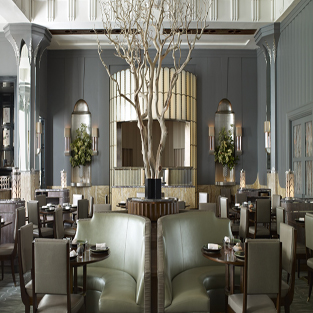 So, to revert to our original theme, what makes Fera so radical? Simple: it subverts everything people had, until very recently, always understood a grand restaurant to be like.

Look back at the most fashionable restaurants of the ’80s, Langan’s Brasserie, with its illuminated entrance-arch. Look at the archetypal ’90s restaurant, Quaglino’s, with its look-at-me ocean-liner-style staircase. The message, throughout, was clear: you, the customer, are a star.

In just 15 years, we have gone from a restaurant that was almost Victorian – via one where a big TV name (notionally) worked behind a Victorian-style green baize door – to the new era where the whole concept of the green baize door has not just been retired, but blasted into some other universe.

Even more revolutionary, customers are invited to wander into the – beautiful, stainless steel, induction-hob – kitchen at any point. And even more extraordinarily, the chefs are encouraged to wander out of their kitchen to serve their creations to the customers.

What would Lord Grantham have said? Who’d have thought that the dining room of a famously ‘exclusive’ hotel would – from generation to generation – have given, and continue to give, such clear signpost to the way dining out in the capital is going?