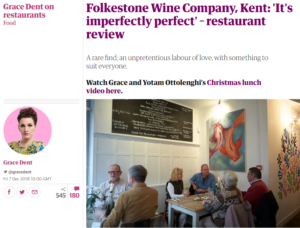 Grace Dent for The Guardian visited yet another home-from-home seaside location, this time in Kent; where she had to invent a new term for the “imperfectly perfect” (so much so that she wanted to “ditch the review to protect it from idiots”) type of restaurant she found there – the “Snuffly-Ligget”.

It’s a “small, 26-seat, independent labour of love up a pretty street near Folkestone harbour”, with just two staff members (both with excellent Kent-based pedigrees) and “a pleasing menu served on mismatched crockery”. And it’s certainly one of the “bijou, delicious, slightly eccentric, definitely raffish and louche British gems” she’s loathe to review, in fear of sending moaners their way.

Just a few menu options would be a problem for some visitors, but Grace enjoyed the “perfectly pan-fried hake, squid and a vibrant, zesty gremolata” and “wobbly autumn gnocchi” immensely. The “thick wodge of French toast served with fresh raspberries, raspberry coulis and fresh clotted cream” was her favourite memory of the day.(25/30) 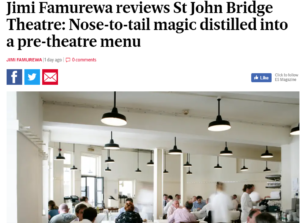 Jimi Famurewa for The Evening Standard checked out the pre-theatre menu at the newest theatre in town (The Bridge, by Tower Bridge), “a speedy, pared-back offshoot” from the venerable St John “sainted stable”.

Be warned: the “the oven-fresh interval madeleines… will have you wishing away even the most gripping of first acts”. The restaurant is “inarguably beautiful”, with a long bar where you collect your plates, which might include St John Welsh rarebit, a “glittering, thickly coated miracle of squidge and crunch” and other “truly iconic” dishes.

It’s a “noble, ballsy experiment, offering joyful, deft food” – he even missed the first half of the play in order to properly enjoy it. (7/10) 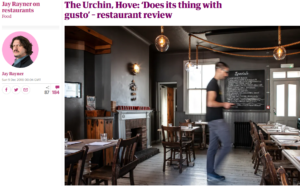 Jay Rayner for The Observer visited a three-year-old pub-conversion in Hove (“which is definitely not Brighton, even if you can’t see the join”). Formerly The Bell, The Urchin is a seafood gastropub, “selling shelves of craft beers and things that once swam”.

“The cooking, like its decor, is rough-hewn and self-consciously so.” The seafood cooking, much of it with an Asian slant, is solid: salt-and-pepper squid was “crisp, greaseless, punchy”, while Malaysian prawns are “all swoon and ahh” (especially when the leftover curry sauce is mopped up with the “perfectly crisp chips”.

The beer selection is “a fine thing” and there’s a “well-priced wine list” and outside space – for those mourning the loss of our pubs, The Urchin “despite appearances… really is still a pub”. 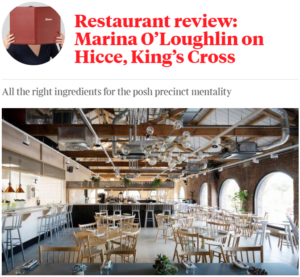 Marina O’Loughlin for The Sunday Times went to “a large, clattery mezzanine above a shop” – in a shopping precinct no less: otherwise known as Hicce, part of the hip new development Coal Drops Yard in King’s Cross.

The “shortish menu” (with all of the “culinary buzzwords”) is divided into “unnamed sections” (including ‘hot sticks’) – “a bit of an intelligence test” from which Marina and her companion order “with wild abandon”. There’s “some delicious stuff” – although they find it uncohesive, “like a mildly disorganised indoor picnic”, and that “simpler stuff works best”. Certainly, it “comes unstuck in the bigger courses”.

Hicce is “a procession of tastes and sensations with no discernible shape or flow”: “ideas rather than dinner” – and quite frankly “a bit of a hot mess”. Even the “affable, clued-up staff” can’t help it. 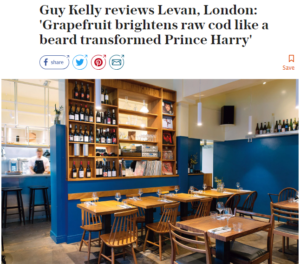 Guy Kelly in The Telegraph visited the “once-dismissed neighbourhood” of Peckham’s newest settler, from the team behind Brixton’s Salon. It’s “worth visiting even if you’ve no business south of the river”, a single room with “dinky bar area” and obligatory open kitchen, decorated with record sleeves (the name itself pays homage to NYC DJ Larry Levan).

“Inspired by Europe’s ‘bistronomy’ movements”, Levan serves “clever, high-quality, seasonal dishes without the attendant prices”; the menu may seem short (especially compared the “Argos catalogue of a wine list”) but “is as roomy as Mary Poppins’ bag”.

There was the signature dish of Comte fries to start (“cheesy chips, but the cheese is the chips”), and the sharing dishes were all “eminently orderable” and “immaculately balanced”. Service was “every bit as attentive and knowledgeable as anywhere in the West End” – all making Guy rather pleased that he’s just moved there. (****1/2) 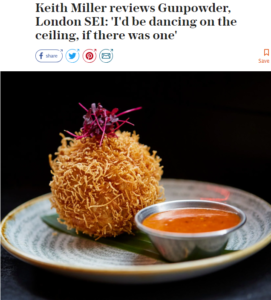 Keith Miller for The Telegraph visited the new branch of Gunpowder in London Bridge, where he found the ‘raw’ interior slightly tiresome (“Just get a ceiling, already!”) and some of the dishes slightly oddly conceived, but a four-and-a-half star rating means he must have mostly enjoyed the “not quite fusion” subcontinental dishes. Flavours in the more “authentic” (British Curry house, circa 1974) dishes impressed, too with flavours “separated, amplified and put together again, still themselves but somehow better”. (****1/2) 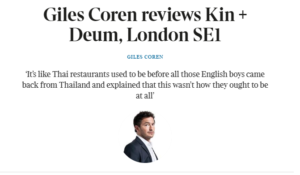 Giles Coren for The Times played on the cultural appropriation theme by acting all offended that a new Thai restaurant in Southwark is actually run by a Thai family, rather than “white boys who have travelled around Thailand a bit”; and what’s even more shocking is that they’ve “done an excellent job” of it.

Salted basil chicken “rocked”, Thai dumplings were “a delight” and Siam’s aubergine was “a wonder”, an “amazing bit of cooking”. (28/40)

Tom Parker Bowles for The Daily Mail reviewed the seven cookbooks of 2018 that he considers “essential reading”.