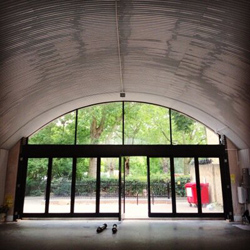 The owners of Hackney wine bar Sager + Wilde have revealed their plans for expansion with a second site opening under the railway arches of Bethnal Green. Michael and Charlotte Sager-Wilde will launch a new 90-cover restaurant, Mission, in Paradise Row in late August.

With a focus on Californian wines, the pair’s latest venture will even feature a special Sager + Wilde Pinot Noir from America’s west coast. In fact Mission, much like everywhere else in London these days, will have a distinctly US twist to all its menus. We’re told that cocktails will be ‘classic American’, while food will ‘marry Californian and Italian influences’.

Initially the restaurant will open for dinner and weekend brunch only, although a lunch service is planned for a later date.

NEWS
Harrods is back: new Jason Atherton 'Social' and late opening in the Dining Halls

NEWS
Harry Morgan's closes for good, though a new location might be on the way

NEWS
Vasco and Piero's Pavilion is no more, but it 'will be back'

NEWS
The Windmill Soho is staging a mighty comeback