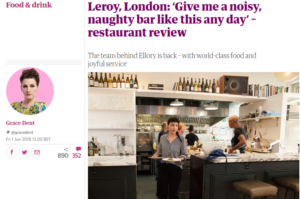 Grace Dent in The Guardian awarded Leroy – the reincarnation of Shoreditch’s Ellory (RIP) – a solid 27/30 for being  “a dark, noisy, naughty wine bar with a pleasing menu… where no one can tell that I’ve kicked off my shoes” (regular readers will know that if Grace is shoeless, she’s happy – add a dog and a vegan menu and she’s all yours).

Despite a very pretty “Instagram feed… filled with pretty shots of fresh mackerel tartare,” Leroy isn’t truffling for the star that was awarded at Ellory, which Ms Dent heartily approves of. “Who wants to eat dinner surrounded by bores who collect dining anecdotes like they’re Panini football stickers?”

There’s praise, too, for the staff: “the team at Leroy seem genuinely happy… service is joyful and unpushy”; and the impressive self-assurance of the place: “Very few restaurants hit the ground in a fully formed state, proudly sure of what they are and are not, but Sam Kamienko, Ed Thaw and Jack Lewens have landed in perfect shape.”

Lots of choice for vegetarians – grace devoured the beetroot and hazelnut salad “like a large greedy squirrel” and raved about a dish of spiced purple broccoli: “a rosy-cheeked ramble through an organic allotment before finishing up with your knickers around one leg and eating a Bombay Bad Boy Pot Noodle… I, for one, am 100% supportive of this type of cooking”

“Ellory was good – we all loved Ellory – but Leroy is much, much better.” 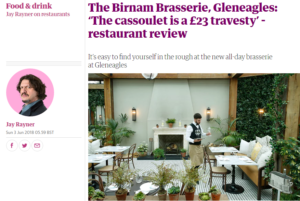 Jay Rayner in The Observer continues his tour of Scotland with a review of the yearling Birnam Brasserie at the Gleneagles Hotel (“Center Parcs for rich people”). It’s safe to say he wasn’t terribly impressed, not least by the eye-watering prices, including a £27 tuna nicoise: “the cheaper all-day option… cheaper in the way Knightsbridge is cheaper than Monaco”

He added: “The food is a weird mixture of adequate, good and “what were they thinking?” Generally, the menu draws on the French brasserie tradition by way of golf clubhouse.”

“I’m not suggesting you should actually eat there. The main draw is the people-watching… happily, I’m here to do that for you. It’s hilarious.”

Jay was most disappointed by the cassoulet, only offered once a week, which he presumed “means there’s time to give this classic dish the attention it deserves”. Sadly for him, when it arrived, “at the bottom are white beans in a violent tomato sauce that hates me. The belly, the sausage and the duck confit have been plonked on top. Breadcrumbs are represented by a piece of garlic baguette. It’s a £23 travesty.”

The one high note? “Service is, of course, perfect. Young waiters march on through the oddness of it all, as if it makes total sense.” 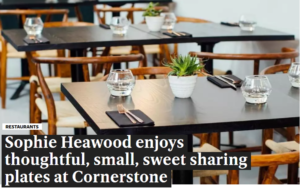 Guest reviewing in The Evening Standard this week was Sophie Heawood, who reviewed Hackney newcomer Cornerstone (8/10). Persuaded into getting the set menu – “more a cluster of things the chef, [ex-Outlaw’s at The Capital] Tom Brown, liked best that had come in that day” – she enjoyed “oysters so sexy and scallops so fresh that you can almost taste their muscle memory of swimming.”

There were “thoughtful, small, sweet sharing plates,” including a cuttlefish stew she was still thinking about three days later and a “cured monkfish [that] tasted so innocent until my tongue hit the lime pickle, which was a total slut”.

“Cornerstone has upped the ante” in Hackney Wick, although Sophie wonders “if most new visitors will get an Uber to the door and never see what makes The Wick London’s last zone of mild anarchy”. 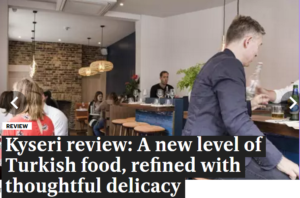 Regular Evening Standard reviewer David Sexton  visited brand-new Kyseri (****) from the owners of Shoreditch’s Oklava. It’s another Turkish restaurant, but “no lazy roll-out, having quite a different menu from Oklava.”

Kyseri “has an exceptionally open, friendly and sociable feel. The service is lovely, the room happy. You just have to share here.”

And the food? “A revelation of an entirely different level of Turkish — or, as it may be, Turkish-inspired — cooking… pasta dishes were delectable”. Chef  Selin Kiazim “has been said to be taking an  Ottolenghi-style approach to Turkish cooking but her food feels dedicated to a greater authenticity and less wanton invention than that.”  Alongside this, “an enticing and moderately priced list of rarely seen Turkish wines”.

He declares it “a good place to go altogether… Kyseri is a treat of the kind that only a restaurant culture as vigorous and varied as London’s makes possible.” 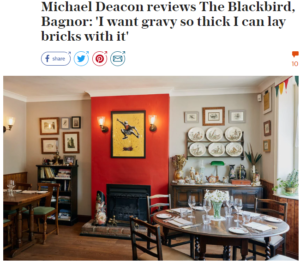 Micheal Deacon‘s Telegraph review of The Blackbird in Bagnor was disturbed by the whooshing “of the Newbury bypass, slicing through the Berkshire landscape just a few hundred yards away”.

He liked his environs: “The Blackbird is a pub, dating back to the 17th century, but after a revamp last autumn it’s now primarily a restaurant. For the most part it still looks pleasantly pubby and old-fashioned, though. A bar with a range of local ales. Toby jugs on the windowsill. Paintings of dogs. An elderly-looking stove. A vast framed map of India, from the days when it was still in the Empire”.

He also enjoyed the food. Of his starter: “I had the scallops with pink grapefruit, sesame and coriander, served in a shell-shaped dish on a bed of salt. It was a very small helping, but what there was of it offered nice combinations of flavour and texture: juicy, sour, slippery, soft.”

And his main: ” I went for the lamb, which was gorgeous, and came with potatoes roasted in beef dripping, plus the most enormous Yorkshire pudding”.

But Deacon didn’t think much of the gravy, which was too thin, or the fact he could hear cars on the bypass.

Two other reviews in The Telegraph included a disappointing trip down Memory Lane for Kathryn Flett at Mr White’s Chop House: “not so much MPW-branded as MPW-themed and, as such, it is pointless, not to mention overpriced and badly run.”  Meanwhile, Keith Miller gave us a grammar lesson at oddly named West Hampstead newcomer Ham (“Ham’s actual name isn’t Ham; it’s Hām” – “and no, there’s no ham on the menu”). However you pronounce it, Ham is a “by-the-book Brit brasserie for the late 2010s”, where “dinner was pretty good, if somehow eluded by greatness”: it “ought to do well… and deserves to: even if the cooking’s not flawless, it’s done with verve and originality.” 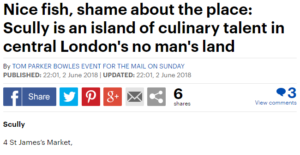 Tom Parker Bowles in The Daily Mail continues the culinary highs he experienced last week at Noma, with a four-star visit to “fantastic” Scully. A small bowl of chickpeas was “one of those dishes that belt the words clean out of one’s gob, transforming dumbstruck, awed silence into the broadest of silly grins.” Ex-Nopi chef Ramael Scully is declared a “pulsing raw talent, with a palate paved in gold”  – “I can’t wait to eat more of his food.

TPB can’t love the location, however, “in the desolate St James’s Market, the culinary equivalent of Dredd’s Cursed Earth”: “he has to get out, before it’s too late. The food may be fantastic, but this place will devour your soul.”