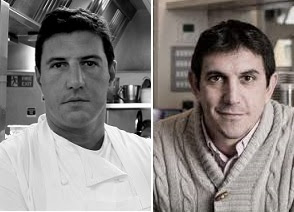 Claude Bosi is off to join his brother Cedric for a bit of country air in the pair’s spiritual home – Ludlow. The quaint Shropshire town was firmly fixed on the foodie map back in 2000, thanks in large part to the success of Claude’s restaurant Hibiscus, which he moved to Mayfair – never entirely successfully – in 2007.But it seems he just couldn’t stay away. Claude has teamed up with his sibling to acquire Ludlow’s 10-bedroom Town House hotel, which will open next week on 8 September. The news comes just six months after Cedric announced he was moving from London to take over the running of the Charlton Arms – what is it with Bosis and Ludlow?Strangely there will be no restaurant at the Town House hotel, but guests will be offered a continental breakfast.Last year Claude bought out his investors in Hibiscus, which underwent a complete refurb, and sold his share in two London pubs – the Fox & Grapes in Wimbledon and the Malt House in Fulham – to his brother and investors, Brakspear and Jolly Fine Restaurants, though Claude continues to act as a consultant.