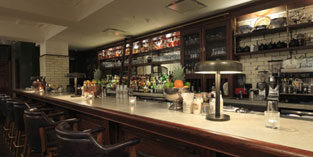 Huw Gott and Will Beckett opened the latest outpost of their ever-popular Hawksmoor restaurants in Knightsbridge today (3 July). The duo aren’t offering a soft launch period at their new venue (most likely because they’ve never had any problem getting derrières on seats) but anyone who books a table during July and August will get a round of champagne on the house.

Perhaps surprisingly, this is the group’s first incursion into the fashionable SWs… even though its “superlative” steaks and “tantalising” cocktails (and the sometimes “hideous” prices too) would seem a natural for the area.

The menu has taken an Asian turn with new options including citrus scallops with chilli and ginger; devilled Brixham lobster; Vietnamese style oysters and lobster roll with sriracha; of course the usual grill items feature too.

The new Hawksmoor restaurant opened on the former site of the Frankie’s Bar & Grill (previously owned by jockey Frankie Dettori in conjunction with Marco Pierre White) in Yeoman’s Row. Currently the group has outlets in Covent Garden, Piccadilly Circus, Shoreditch and the City, as well as Foxlow in Clerkenwell.