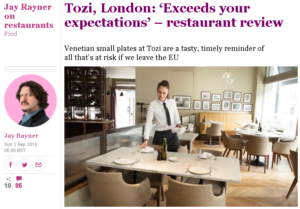 In The Guardian, Jay Rayner was searching for somewhere easy to eat near the Royal Albert Hall, and stumbled upon a gem in Tozi, a Venetian cicchetti (small plates) spot that’s attached to the Park Plaza Hotel (he wasn’t aware of this when he booked). It’s unmistakably  ‘London’ – “an echoing space of huge white-washed walls and high ceilings”, with “terrific” service from the “young all-Italian front of house staff”.

Cured meats were “exceptionally well looked after” and some of the dishes remind him of Bocca di Lupo and Radici – “high praise” indeed. Another dish, of hand-cut taglioni, is “adult nursery food” (a good thing). A “classic saltimbocca” and a “goblet of tiramisu” end a meal tinged with Brexit-related sadness and regret. 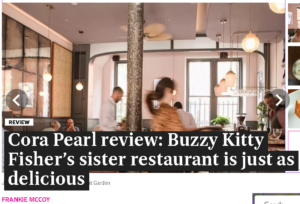 Frankie McCoy for The Evening Standard visited Kitty Fisher’s little sister in Covent Garden, “the tourist theme park that is trying hard to join the cool foodie gang”. It’s “a space almost as awkward as Kitty’s” and the bar-kitchen basement was so “rammed” that he was “practically eating off neighbours’ laps”.

The food? “Nothing at Cora is particularly adventurous”, but well realised and “really tasty”: Chef George Barson “takes things people really like and cook them” – a cheesey crouton floating in fish soup is “childishly yummy”.

Any “flaws feel forgivable” and he left “feeling deeply content”. Overall, Cora Pearl (named for another courtesan, this time Victorian) is summed up as “a ramshackle dinner party in a slightly too small room hosted by someone who loves food but isn’t going to mess up your evening with pipettes of nettle juice and obscure bits of offal no one actually likes”. 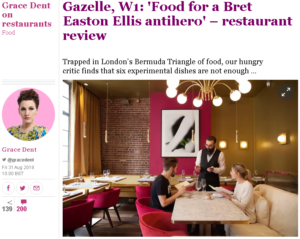 Grace Dent in The Guardian ate dishes that were “reminiscent of something an antihero in a Bret Easton Ellis novel would order” at Gazelle, a “very, very cool new restaurant” in Mayfair “where the vibe is experimental and gastronomically challenging”.

Her experience can be summed up with a stern recommendation to go to Gymkhana if you’re in the area on someone else’s expense account. In fact, that’s exactly what Grace did, even after sharing seven courses of Gazelle’s (admittedly delicious) food, which was served in portions that “would struggle to cover the floor of a Barbie paddling pool”. 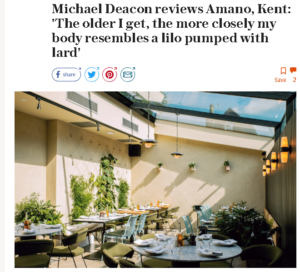 It was off to Kent for Micheal Deacon in The Telegraph, and the newly opened Amano in West Malling, which he describes as a “nice-looking place, streaming with natural light and bursting with greenery”.

He was slightly dreading the Italian cuisine, which he says always “makes me feel bloated, or sleepy”, so he opted for protein-rich dishes, then enviously watched his family wolf the fritto misto (“outstandingly light and bubbly”), pappardelle with mushrooms (“terrific”) and torta della nonna (“sumptuously tart and elegant”). So maybe not ideal for carb-dodgers, but perfect for the rest of us. 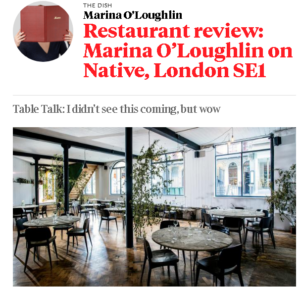 Marina O’Loughlin’s Sunday Times review took her to Native, recently moved from Covent Garden to a bigger and batter Southwark site. After a disappointing visit to sample the new vegan fare at Bob Bob Ricard (“sub-Cranks offerings”), Native was a pleasant surprise – despite being unimpressed with the “foraging and wild food and crowdfunding” ethos.

A starter of food that would otherwise be wasted (“how unalluring does this sound?”) is “not just snowflaky worthiness, each little morsel is gorgeous”. Grouse is served with all its favourite foods and the “cumulative effect of these dishes is bosky, exciting, thrilling”: “even sweet things that seem like perfect madness come off “.

The co-owner’s “infectious, joyful enthusiasm, brimful of knowledge” combines with the “fireworks happening on the culinary front ” to make a place that’s “little short of ravishing “. 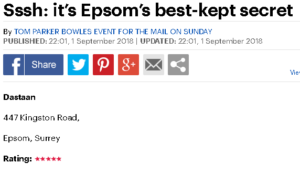 Tom Parker Bowles in The Mail on Sunday trekked out to the ‘burbs (by train, no less) in search of Dastaan “on a pretty unlovely, nondescript stretch of Surrey dual-carriageway “. It can’t be claimed as a discovery, for Dastaan originally appeared in a national newspaper back in April 2017, when Marina O’Loughlin reviewed it for The Guardian, and several big-name chefs have praised it lavishly.

But (as you can tell by the five star rating) Tom was just as blown away as Marina – the chef-patron Sanjay Gour formerly worked at Murano, and was briefly head chef at Gymkhana. From the very start, “the food here is leagues removed from your usual Brit-Indian curry house “, indeed it’s “sublime… seriously knock-out “. Dastaan “gets all the small details right” – a duck and guinea fowl kebab, is “a splendid cylinder of expertly spiced joy”, and the spicing on the marinated lamb chop is “so precise that it seems laser-guided”.

TPB declares that Dastaan (“a national treasure”) serves “some of the best regional Indian I’ve eaten in years” And all at suburban prices, too: “It may share chefs and exalted ingredients with Gymkhana, but it sure doesn’t share those prices.”

Tim Hayward’s heart was won by Worton Organic Garden: “The Asian salad was, without a shadow of doubt, the high point of my very greedy summer”.