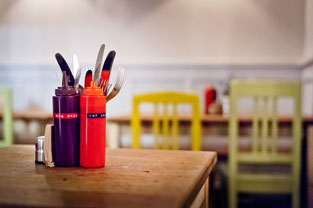 Chefs Tom Adams and Tom Swanny will leave their Newburgh Street home and head to the Cornish town of Rock, for a one-off BBQ. There are only 40 places at the ticketed event, which includes Pitt Cue’s signature barbecue, home-cured bacons and hams and beef and truffle loaded skins, followed by suckling Mangalitza mixed grill and ‘Keveral farm messes’ to finish. Rock’s local brewery, Sharp’s, will offer four of beers as part of the £45 ticket price. Tickets are available from Outlaw’s reservations team on 01208 862 737.

Nathan Outlaw and the team from his eponymous Cornwall restaurant will commandeer the kitchen at Soho’s Pitt Cue Co. The menu for this seafood feast will be announced on the day of the event, which will be run on the usual Pitt Cue first-come-first-served.