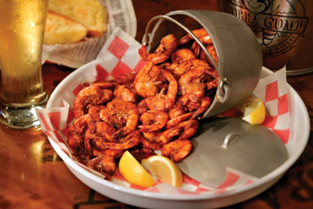 It’s been in the offing for well over two years and this week London’s outpost of the Bubba Gump Shrimp Co. will finally open. This restaurant, based on a fictional shrimp company from the movie Forest Gump, will launch on 1 October at the Trocadero, alongside Leicester Square’s other touristic gems like the Angus Steakhouse, M&M store and Bella Italia.

The casual dining seafood chain has 13 international locations serving up such delights as the Bucket of Boat Trash, Lt. Dan’s Drunken Shrimp, Shrimper’s Net Catch and the Run Across America Sampler.

Bubba Gump Shrimp Co opened its first site in California in 1996 and now has 41 restaurants worldwide. The press release from owners, Landry’s, states that Bubba Gump ‘remains the first and only theme restaurant chain based on a motion picture’ – we can’t help thinking there’s probably a reason for that.

Leon and co. close to raising £1 million for NHS staff
Giggling Squid secures £5m loan to tackle coronavirus damage
A pop star has complained after not being allowed into Sexy Fish in a hoodie and trainers
Top chefs and restaurateurs talk coronavirus tier restrictions
Share this article:
Facebook
Twitter
Join the Community
Join for Free