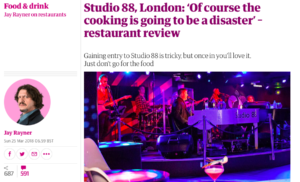 “A new live music bar near Leicester Square… where almost all the food is served in cones. I got frisked… If there’s one thing that really encourages the appetite, it’s being felt up by a total stranger with meaty hands.

“… a nightclub space with video walls of exploding fireworks. Studio 88 is brilliant. I’d go back in a heartbeat. Yes, the food is that killer combination of appalling ideas and dreadful execution… one of the tightest house bands I’ve seen in years… service is terrific.

“… their take on salmon tartare… involved avocado, olives, currants, coconut and despair… dim sum at a shocking £20… allowed to cool and coagulate until they were stuck to the slate.

“It’s a dance bar off Leicester Square. Of course the food is going to be a disaster of a calamity of a travesty.” 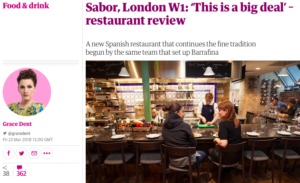 “…prawn croquetas that are tiny portions of heaven… London’s food scene already loves it… The coming of Sabor is a big deal.

“Beyond doubt, [Barragan] and her team changed the face of Spanish dining in the UK, making it crisper, brighter, more chic.

“… scene-shifting cuisine… on a wet Wednesday in March, there’s a 90-minute wait for one of the 19 seats viewing the open cooking range.

“I fell in love with the bombas de chocolas… teeth-encrustingly naughty. There’s lots to love here, and lots that could be a little better. But it’s still… some of the best Spanish food in Great Britain.” 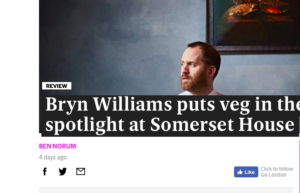 “… food is …paired back, but elegant… described as vegetable centric… the truly vegetable-focused dishes are the real stars.

“… cocktails are quirky and enjoyable.

“… not quite… flagship material.” 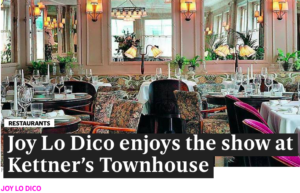 “… in a nod to its original owner, one of Napolean Bonaparte’s chefs, it has become French again — very French.

“The dining room was a picture in itself.

“The surprise dish was a baked celery root… which almost sang from the plate in its delicacy. Kettner’s… has returned grace and propriety to one of the seedier corners of Soho, with live piano music and a staff alive to the drama of an evening meal.” 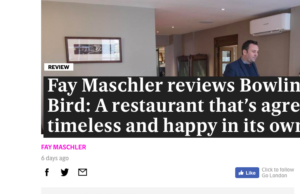 [long ramble about how The Eater is roasting critics every week, including her – seems to be an excuse for not having reviewed this place earlier…]

“… comfortable, sleek and naturally congenial… agreeably timeless and happy in its own skin. Bowling Bird is a restaurant for all seasons — and ripe for visits.” 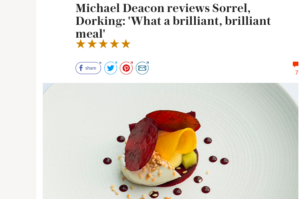 Michael Deacon in The Telegraph gives five stars to Sorrel in Dorking: “What a brilliant, brilliant meal”… 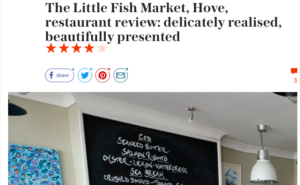 “I have been… consistently disappointed whenever I’ve eaten out in Brighton. Brighton – all that is currently most irritating and tediously hip.

“… quite exceptional subtle-but-punchy bream… a dessert that was so much more brilliant than it needed to be… it turns out that all you have to do to eat quite fantastically well in Brighton is… go to Hove.” 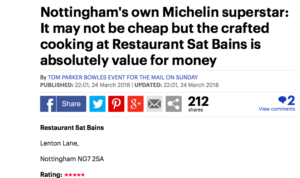 “Bains is one hell of a cook… he’s never stopped evolving.

“… butternut soup as smooth as Roger Moore lounging in silk pyjamas… this is old-fashioned cooking, mixed seamlessly with the most modern of approaches.

“There’s an utter confidence to his cooking, a true sense of his character infused into every dish. The work involved … is extreme, yet the flavours are straightforward and gleefully intense…no avant-garde tomfoolery. The balance of every dish is always perfect, the acidity just right.”

“Even the wines, from China and Uruguay, Thailand and Greece, thrill… the food dazzles and beguiles… a truly great chef with a brilliant brigade.” 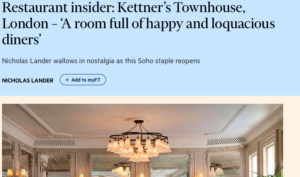 “Only the wine list presented a problem — in the restaurant’s low lighting it was impossible to read the tiny font in which the vintages were printed. But we enjoyed what we drank from the good selection offered by the glass, while admiring Berg’s cooking, wallowing in Soho nostalgia, and observing a room full of happy and loquacious fellow diners.”