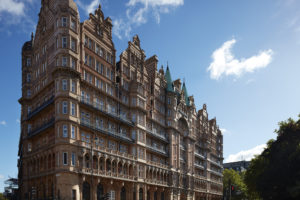 Neptune, a neighbourhood restaurant from Redman and stylist-turned-restaurateur Margaret Crow, aims to create a ‘Bloomsbury Salon’ for the 21st century. The hotel also has a rather grand afternoon tea parlour Palm Court in the renovated ball room, a cocktail bar called Fitz’s and coffeehouse-cum-wine-bar from Burr & Co.

Offering all-day dining, Neptune will seat 120 guests and features an innovative approach to the classic oyster bar and a new style of British caviar service, swapping out traditional blinis for freshly made waffles with house cultured jersey cream. The menu is seafood-focused but wood-fired cooking will also be on offer in the à la carte menu. The oyster bar, located at the centre of Neptune’s dining room, will serve a variety of oysters and shellfish from small niche growers around the UK. Towering seafood platters will be full of classic raw dishes spiked with diverse flavours such as hardshell clams, dill granita & buttermilk or scallop carpaccio, ajo blanco, nori & kombu oil.

Fitz’s cocktail bar (named after Fitzroy Doll and designed by Russell Sage Studios with a glitter ball hanging from the ceiling) includes original features such as the large fireplace with stained-glass window above it. The list of signature cocktails has been created by The Principal’s bars manager, Sean Fennelly, who leads the team at Fitz’s having most recently worked as the General Manager for Milk & Honey.

Burr & Co coffeehouse and bar will be open from 7 am serving Caravan coffee, tea, pastries and breakfast items to eat in or grab-and-go, while the all-day menu includes soups, salads and sandwiches. With its own entrance on Russell Square at the corner with Bernard Street, Burr & Co. is the perfect place to meet friends, or to catch up on emails and grab a great cup of coffee.

Over the course of May and June, The Principal London will open additional spaces, including the original ballroom, eight meeting and event spaces, and the Palm Court, which sits at the heart of the hotel and will become its social hub. At one end, a winter garden provides a semi-private space while at the other an outdoor terrace looks out to a ‘living wall’ of plants. Afternoon tea provides the signature moment in Palm Court, whose menu has been devised by executive chef Roger Olsson and executive pastry chef Ryan Thompson. In the evening, a gin trolley will offer herb-infused cocktails as well as a Champagne list focusing on small, lesser-known producers.