There are already dozens of new London restaurant openings lined up for this year on our Coming Soon page. Here are some of the capital’s most anticipated openings…

Highly regarded Madrid chef David Muñoz is set to open a Mayfair street-food operation, pushed back from summer 2014 to January next year – we’re told to expect an open kitchen and ‘diner interaction’.

Back where it all began; Gordon shows his sentimental side by taking over the spot that once housed Aubergine, the restaurant where he made his name. Opening has now been pushed back until April. The man who can seemingly do no wrong, Jason Atherton is to launch this robatayaki and sashimi-come-izakaya-style spot in February, on the former site of Turnmills nightclub. Will his empire finally feel the strain of expansion in 2015? Only time will tell.

A new venture from Will Lander, co-owner of The Quality Chop House (but more importantly ex-Harden’s employee!) and Daniel Morgenthau (ex-10 Greek Street) serving food all day and over 20 wines by the glass. Expected early January.

Jacob Kenedy and Victor Hugo, the duo behind Soho favourite Bocca di Lupo, are to open a larger, more casual operation on the site of a Pizza Hut in the heart of Theatreland. Expected in March. 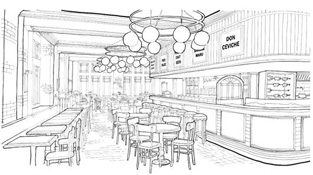 The latest in a slew of Peruvian restaurant openings, Martin Morales moves east to the Alexandra Trust Dining Rooms with a second outpost of his ever-popular Soho original, arriving spring 2015.

American steak behemoth open their first non-US location just off the Strand, with a whopping 300 covers. It’s opening is still some time off though, anticipated in May next year.