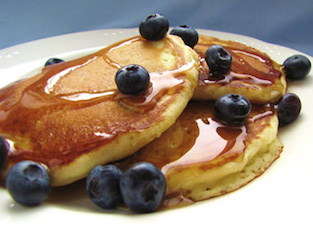 Exciting news for anyone who loves pancakes (so, pretty much everyone), it’s Shrove Tuesday (17 February)! Last year we had to wait until March for our flippin’ pancakes but with an early Easter on the horizon Pancake Day has been pushed up the calendar too. In honour of this most delicious day we’ve rounded up the best places in London to eat pancakes on Shrove Tuesday. Oh who are we kidding? The rest of the year too…

“Wolesley-lite!”; Corbin & King’s “classic, European grand café”, on the edge of Covent Garden, is “more intimate” than its sibling, but otherwise a chip off the old block – the “classy”, “feel-good” ambience, and “reliable” (if “slightly ersatz”) Austrian cuisine make it “a wow for business”, especially at breakfast. The menu includes a pancake section, with fillings like maple syrup, bacon, blueberries and crème fraÃ®che, and plum and cinnamon compote

A “NYC-wannabe”, this smartly turned out new Soho diner does have a “nice bar” and it can turn out a decent brunch too. Our survey reporters were a bit down on the restaurant’s service, but its US-style pancakes are top notch. Have them with maple slab bacon or banana cream and maple syrup. Sites in Chiswick and Twickenham were added last year.

Try it for free! We’re offering one lucky Harden’s reader the chance to win a meal for two with drinks at Jackson + Rye. Enter now. 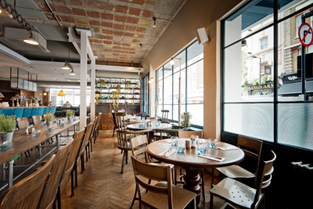 Breakfast and brunch “NYC-style” – “hearty, delicious and creative” – have helped generate a big buzz around this “vibey” Fitzrovia brasserie; lunches and dinners, though, can underwhelm. Try their buttermilk pancakes served with berries, vanilla clotted cream and maple syrup.

Sister café to the newly opened Fields in Clapham Common, this south west London spot has achieved a bit of a cult following thanks to its inventive weekend pancake menu, announced via their Instagram feed. Its pancakes are all gluten-free and toppings include honey mascarpone, raspberries and whey crunch, rhubarb with strawberries, creme fraiche and coconut sugar. M1lk hasn’t made it into the Harden’s survey in the past but if you think they deserve a mention in our 2016 guide then register to take part in the survey here.

On Hackney’s up-and-coming Chatsworth Road, a café serving sweet and savoury crêpes with world-wide influence. The menu draws inspiration from countries like Japan, the Caribbean and Belgium (to name a few). The “Of the World” crêpe is hotly tipped: chistorra (similar to chorizo), red peppers, aubergine, courgette and rocket with melted camembert. Service here can be slow, however, and perhaps doesn’t quite measure up to the standard of the food. 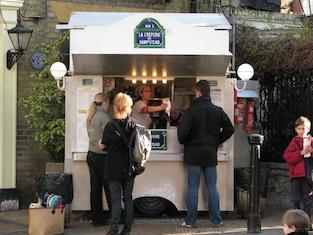 Don’t fancy the traditional pancake? Try a crêpe instead…

Enjoy a savoury crêpe at this Parisian crêperie van that’s been a Hampstead Village fixture since 1980. Favourite fillings include ham, cheese and egg – served hot and eaten on the street, the way God (and the French) intended.

This south Kensington stalwart (opened in 2001) offers a selection of cooked-to-order sweet and savoury crêpes. Diners can decide whether they want their crêpes soft or crispy and there is a dizzying array of fillings to choose from. To accompany your meal Kensington Crêperie has a list of all French wines, beers and ciders.