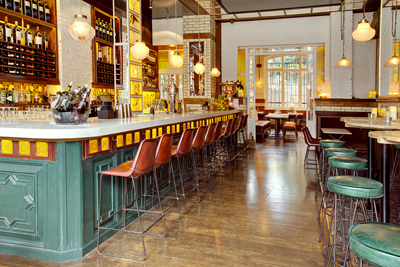 It’s all happening in Manchester at the moment. No sooner have the duo behind trendy Hawksmoor announced plans to open an outpost there than the trendy(ish) Ibérica group unveils plans to join them.

The tapas restaurant, with four sites already in London, has long been praised by reporters for its authentic Spanish dishes. Even as the Ibérica group expands, standards have remained high, with self-professed ‘obnoxious scenester’ Marina O’Laughlin overcoming her general loathing of chains to heap praise on its Farringdon outpost in the Guardian just last week.

Ibérica, founded by the brilliantly named Nacho Manzano, hopes to open its 200-cover Manchester site on The Avenue, part of the Spinningfields development, later this year.

The Spinningfields development is currently undergoing a multi-million pound refurbishment to transform it into something of a foodie hub. Hawksmoor will open at the nearby Old Courthouse next year. The building is already home to the Handmade Burger Company and will soon boast a new venture from Damson boss Steve Pilling – Mr Pilling’s Roast Restaurant and Oyster Bar.